One of our TDT tasks for RME is to visit a sacred place or place of religious significance. So during reading week, I took a visit through to Dunfermline, to visit the Abbey. To my disappointment – the abbey itself happened to be closed on that day! However I was still able to walk around the outside, and to visit the church.

The church at Dunfermline abbey is an active, worshipping community. It holds a weekly Sunday service, as well as various other activities such as prayer groups and ‘messy church’ (for more information, see the website).

When walking around the outside, I was able to appreciate the ancient architecture of the abbey and the impressive church building. I felt that this shows the importance which was placed on these buildings at the time they were built. It is also located in a central area of the city, close to the main high-street. This showed me that the church would have, at one point, been a highly important part of life for the people who lived here.

Inside the church, I was interested to find that the building had been renovated and decorated in a modern way. I was told that this part of the church was re-built following a fire. I also feel like the more modern feel reflected the fact that this church was still being used, and was not just an ancient tourist attraction. That being said, the tourism aspect was clearly apparent, as a gift shop had been erected at the church entrance, information guides were dotted around, and there were also information boards and plaques designed to point out facts of particular historical interest – such as the supposed tomb of King Robert the Bruce.

There were many items within the church which took my interest, including the huge organ, the stunning stained-glass windows, and the monuments and carvings that told the story of significant people.

There was a feeling of quiet respect within the church. Everyone speaks in lowered voices, and moves slowly as they take in their surroundings.

Following my visit to the church, I feel that a primary class could certainly benefit from a similar experience. I would spend time with the class learning about the worship, rituals, and key aspects of the religion first as I feel that children need to have a certain level of basic knowledge and understanding before they can learn from a religious or non religious viewpoint. This relates to the phenomenological approach to teaching religious and moral education (described by Ninian Smart) which supposes that students should be introduced to the key aspects of religions in an objective way (cited Barnes 2014).

Following this, the visit to a church (or indeed to any place of religious significance) could help the students to make a more personal connection with the ideas and concepts. This relates to the interpretive approach (described by Jackson), which emphasises the importance of being exposed to religion from the view of an ‘insider’. It also recognises the importance of reflection and allowing students to assess their own views and beliefs.

Using both the phenomenological approach and the interpretive approach, I would be providing children to opportunities to learn about and from religion, an idea supported by the writings of Grimmitt(2000).

Recently, in RME sessions, we have been thinking about morals, and the idea of right and wrong – both from religious and non-religious perspectives. While discussing this, I couldn’t help but think of a wonderful lesson that I came across on the internet a while back. In this lesson, a teacher used 2 simple apples to demonstrate the damaging impact of bullying, and more importantly how a person may seem okay on the outside, but may be hurt on the inside.

During the lesson, the teacher took 2 apples. She then proceeded to be ‘unkind’ to one apple – dropping it on the ground and calling it hurtful names. She also encouraged the children to do the same.

Then she turned her attention to the second apple, which she complimented and treated with care.

After the children had passed around both apples, they began to compare the apples. From the outside, both apples looked very similar. But when the teacher cut the apples in half, it was very clear to see that one apple (the one that had been treated with care) was fresh and healthy, while the other was bashed and bruised.

(Lesson explanation summarised from THIS ARTICLE by the telegraph)

What a powerful way to explain this concept to children! I love the fact that the children were involved in the actions of being kind or unkind. I also really like how the results are tangible and obvious, to allow the children to really think about what has happened. This would allow the teacher to lead some brilliant discussions about what happens to us when someone is unkind.

TASC stands for ‘Thinking Actively in a Social Context’. This is an approach which can be used when planning, to create experiences that will challenge and engage students – making links with social learning theories such as Vygotsky’s Zone of Proximal Development.

In RME, we were asked to have a go at using the TASC wheel while planning learning around the concept of Pilgrimage. I decided to plan with a lower-school class in mind, and here is what I created: 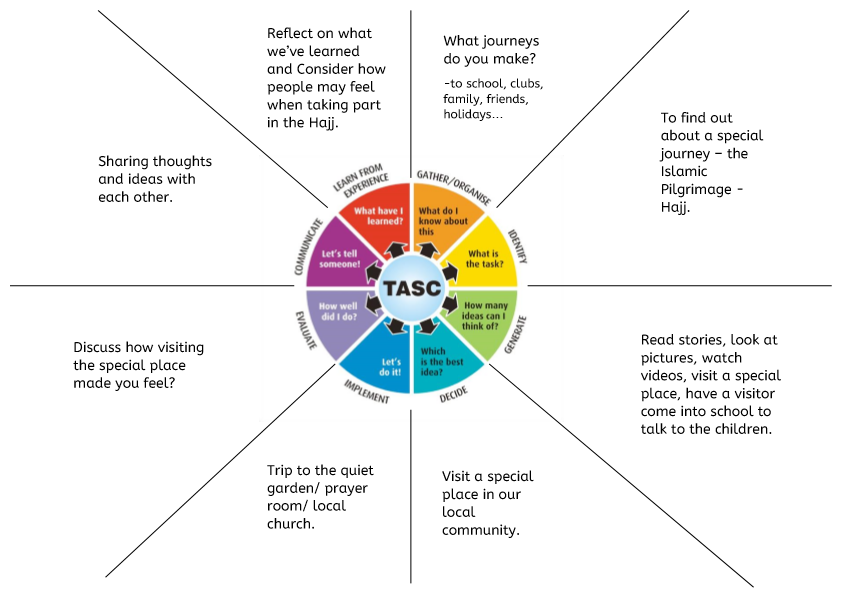 I used the starting point of something that children would be familiar with – the journeys that they make. While this wheel encouraged me to ‘decide on the best idea’, I feel that I would in fact use many, if not all, of the ideas listed in the ‘generate’ stage to build up the children’s knowledge.

I am not sure that I found the TASC wheel particularly helpful in my own planning, however I can see that it could be used with the children, in order to involve them in their learning. I appreciate the ‘step by step’ layout which could help children to think through their task and their approach to learning. I also like the emphasis on communication and reflection, as these are important parts of learning which can sometimes become lost in day-to-day teaching and learning.

For more information about the TASC wheel, visit http://tascwheel.com/

I’ve said it before and I’ll say it again – I love stories! I’ve always got at least 2 books sitting on my bedside table, and when I’m working in nursery, story time is among my favourite times of day. It’s a chance to calm down, relax, and lose yourself in another world.

In this post, I have chosen a story which I feel could be used with a class to explore moral actions.

The story I have chosen is:

The Smartest Giant In Town (Julia Donaldson). This story would be appropriate for children at the younger stages of Primary school.

In this story, George the Giant is fed up of looking scruffy, and treats himself to some smart new clothes. Feeling pleased, he begins his trip home where he happens upon various characters who are in need of help. George is a kind Giant, and happily helps his friends, in ways that just happen to involve his nice new items of clothing! In the end, he has given up all of his new clothes, and ends up wearing his old scruffy robe again. Then, when George finally arrives home, all of the friends that he helped are there to thank him and give him a present.

What I took from the story:

If using this story in the classroom, I would use a ‘reading the text’ approach where we interpret the text and think about the meaning.  I would stop at regular intervals to encourage the children to talk about what the characters may be feeling. After reading, I would encourage the children to think about a time when someone was kind to them, or when they were kind to someone else.

The idea of kindness and helping others is one that is also covered in religious texts (such as ‘The Good Samaritan), and it would be interesting to make some comparisons.

I think that a lesson like this could cover the following E’s and O’s:

I can show my understanding of values such as caring, sharing, fairness, equality and love. RME 1-09b