There is no “one size fits all” when it comes to teaching! Throughout planning, implementation and reflection, it is essential for a primary teacher to recognize that every pupil is an individual. This means that there are numerous learning approaches and preferences throughout any class.

In 1987, Niel Flemming devised categories of learning in order to encourage teachers and students to think about different learning styles. This is known as the VARK model.

Visual: learners who have a preference for images or visual representations of information,

Auditory: learners who prefer to listen to information (for example in lectures) or perhaps use music to aid learning,

Read/Write: learners get the most out of reading texts and writing information

If you would like to find out your learning style; there are many online tests available. I used THIS test which revealed that I have a multimodal learning style with a  preference for the read/write and visual approaches.

While I agree with this result to some extent, I feel that my preferences depend on the type of learning that I am involved in. For example; if I am trying to learn facts and figures for a test, then I prefer to read and write, however if I am learning how to bake a cake or sculpt a model, I would choose visual and kinesthetic methods.

On the other hand, I feel that learning styles are a helpful concept to know, as they encourage teachers to reflect upon the ways in which they deliver lessons. This relates back to my “one size fits all” comment; as a teacher who only presents information in a didactic way is not appropriately supporting those pupils who may learn best in a practical way. It may also be beneficial for students to be able to recognize which learning styles work for them. Flemming and Baume (2006) point out that “any inventory that encourages a learner to think about the way that he or she learns is a useful step towards understanding, and hence improving, learning.”

As a primary teacher, I will strive to deliver lessons which provide opportunities for all different styles of learning (albeit not necessarily all at the same time!) I hope to avoid the mindset that these styles are fixed but rather to encourage children to continually explore the different approaches to their learning.

This week, we were set a TDT which got me excited – designing your own classroom.

As tempting as it is to get carried away, making everything pretty. The input helped me to recognise the amount of thought and preparation that goes into a classroom set up. Everything has a place, and every place is there for a reason.

While thinking about my imaginary classroom set up, I watched this YouTube video:

I really liked the horseshoe layout and the benches as this could be a great way to encourage group work. Unfortunately, I felt that the children who were sat behind the horseshoe (those who the teacher says are good at working independently) may not be able to be involved in group discussions in the same way, or else would need to move to sit on the benches or the mat. While this is manageable, it would be important to consider the needs of the children in the class.

I liked the point that this teacher made about how she considers how the classroom looks to the children. Every seat in the classroom should have a clear view of the board and should be able to hear the teacher. By sitting in the seats, it is also possible to identify any possible distractions or issues.

The TDT task stipulated that we were to plan a classroom for 28 children. I began with the horseshoe layout, but quickly identified that it is a challenge to make space for a large number of children without having some backs to you (unless you are lucky enough to have a very large classroom!) I also found that my horseshoe took up a very large portion of the room and left little space for other areas. 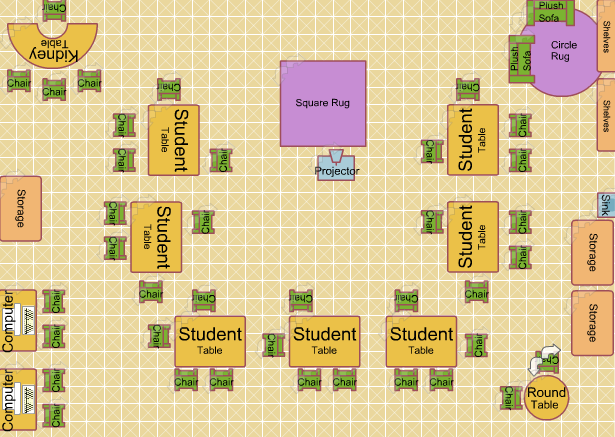 I then decided to design a classroom using group tables.

In both designs, I included a circle table which could be used for small group work, or could also be used if children wish to move away from a larger group and work quietly. Rather than having a traditional teachers desk, I chose a kidney table so that I could work with small groups of children.

I would also create a cosy reading area which would hopefully encourage children to engage with reading as well as being another area that could be used for group work.

When teaching whole class lessons I would move around the classroom, ensuring that all children are able to hear the teaching and instructions.

While working in nurseries, I found myself moving the room around on a semi-regular basis. I found that by moving an area from one part of the room to another, it was given a new lease of life, and the children were suddenly interested in it again. While I would not like to move my classroom around too often, making it confusing and distracting for my pupils; I would not be adverse to trying new things and would try to remain observant and open to when certain aspects of the room are not working as they should.

Another important aspect of the classroom design in the use of displays. As an avid fan of pinterest, I’ve been snooping at other classrooms and ‘pinning’ lots of lovely ideas. Within my classroom I would aim to have a balance between different kinds of displays.

I would use some space to display children’s work. I feel that having work on the walls creates a sense of ownership for the children, and also serves to raise confidence and self esteem as they can feel proud of their achievements.

I would have displays which are interactive. This means that the display has aspects which the children can engage with and can extend their learning.

I would also have displays which act as signs, for example displaying the classroom rules. I believe that it is important to have these on show so that the teacher can refer to them and reinforce them regularly. This allows the children to see that the teaching is being fair and consistent.

Finally (and if there is room) I would try to display interesting pictures or art work which may spark discussion and interest. This may be appropriate in the reading area.

When creating displays and considering my décor, I would be aware that, although I want my classroom to be attractive and inviting – large areas of bright primary colours can sometimes be overwhelming, and busy patterns can make it difficult for some children to focus. For displays with signs and important information, I would try to keep the display uncluttered and clear. I also like to use pastel colours and natural tones for backing paper where possible. 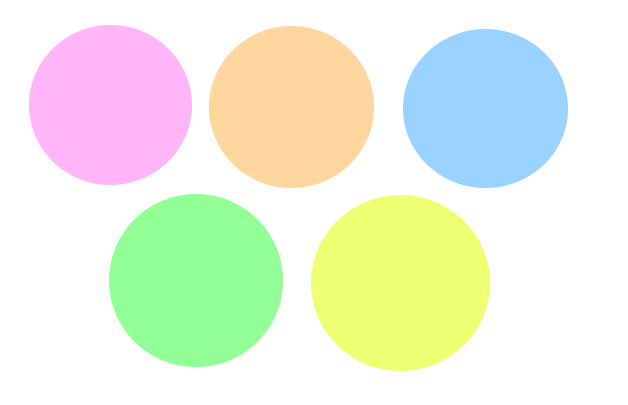 (Here is a brilliant website where you can look at a variety of different classroom set ups and layouts: The School Supply Addict)

Completing this task has helped me to recognise the importance of the classroom layout. It is now very clear that a lot of thought and reflection has gone into the set up of each class. When I return to my placement, I will be able to observe the room with new eyes, considering the use of space and also the displays and information provided for the children.

I’m a little embarrassed to admit… not as much as I should!

Following an RME input, we were set the task of writing down our previous knowledge about the main world religions with an aim to identifying any gaps in our understanding.

There are 6 major religions around the world. These are:

My partner on this task and I were both brought up in Christian households, therefore the ‘Christianity’ column was fairly easy to fill. We did recognise, however, that a lot of our knowledge may not have come from school, but rather through Sunday school, Church, or family.

We then began to jot down anything we knew about the other 5 religions, quickly realising that there were plenty of gaps. While we knew of certain names, events or practices, we often struggled to place them under the correct heading. One of the main examples of this is ‘Ramadan’ which we ended up writing in between some of the headings.

As we wrote our notes, we both found that snippets of information that we had learned at school (or elsewhere) came back to us, for example, I can remember being taught the story of Rama and Sita at Divali time.

Here is our first attempt: 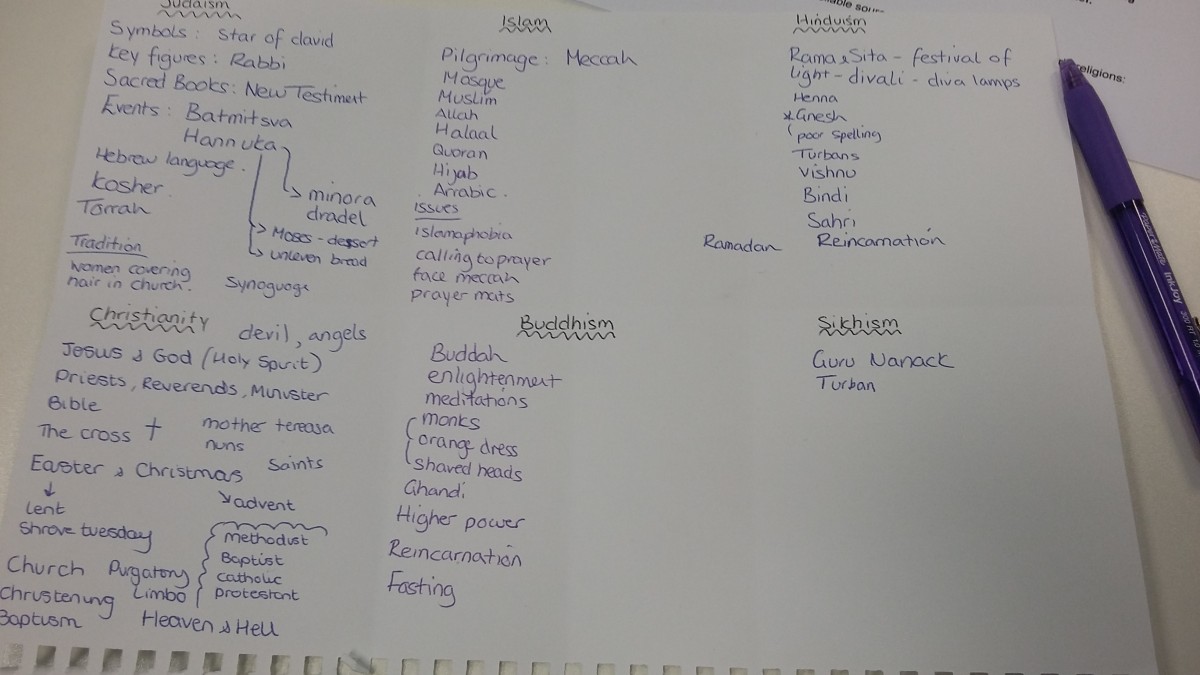 As you can see, we had some knowledge of many world religions. However if asked to elaborate on the names or stories; we would struggle!

We then conducted some reading and research into the main figures and ideas of the religions. Particularly the ones that we were less confident about. 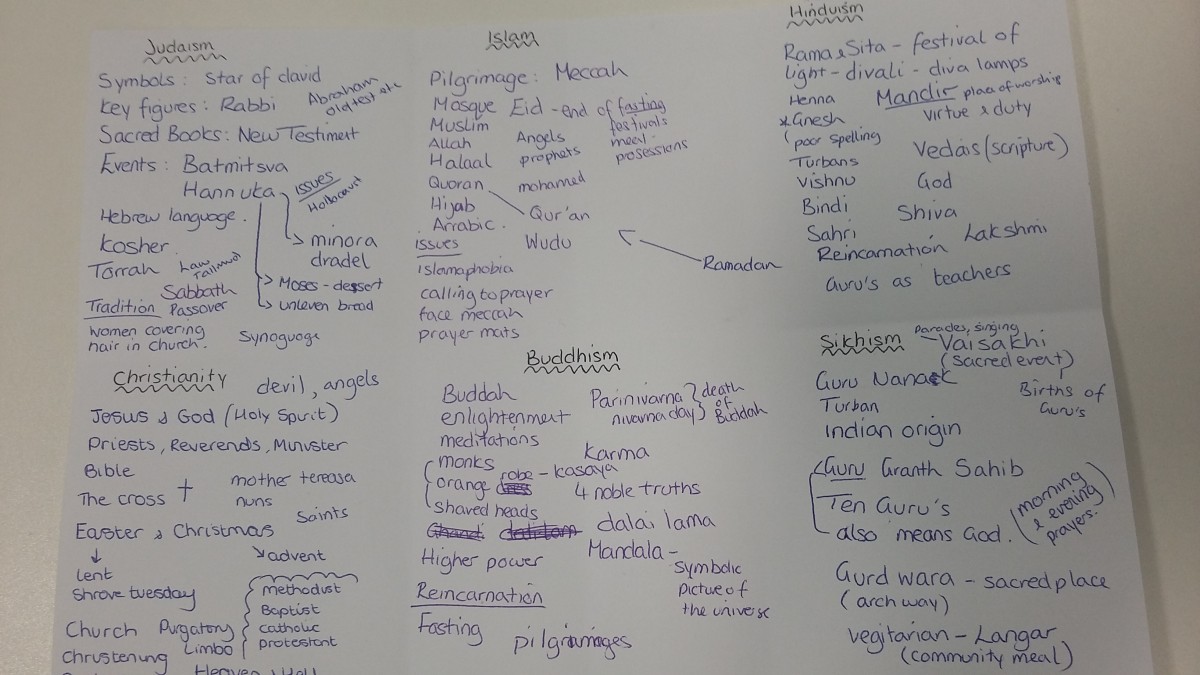 I found this to be a really useful exercise as, not only did it highlight the areas which I will need to do some extra work, but it also made me think about some of my preconceptions.

It is essential that teachers has a deep understanding of religion and can address any prejudices or misconceptions. I touched on this in my previous post following the Paris attacks in November of last year (read the post here.)

Following this activity, I will continue to build on my own understanding of the major world religions. I know that my placement class will be focusing on Sikhism at the time that I will be working with them and therefore I plan to concentrate on my understanding of this religion.

Currently, I am in two minds about lesson planning. Part of me enjoys the creativity of coming up with ideas that will (hopefully) engage and inspire the learners, while the other part finds it very challenging to figure out how these ideas will work in practice. Of course, I realise that this will become easier in time, and also when I am planning for a class of real children, rather than hypothetically which has previously been the case.

With that in mind, I attempted to complete the Language TDT while thinking about the primary 5 class that I will be working with on placement. Our task was to create a lesson plan, based on a children’s book, which would meet the following outcome: 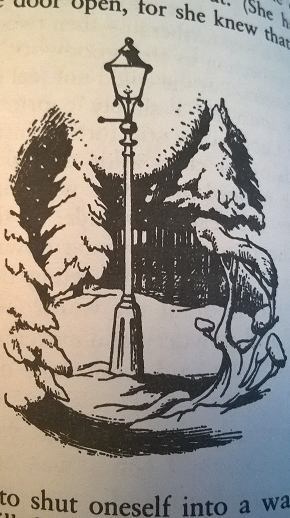 The novel that I chose for this lesson plan is the wonderful: The Lion, The Witch and The Wardrobe by C.S. Lewis. I decided to plan an introductory lesson, while focusing on just one aspect of the learning outcome – setting.

Within the first chapter of the book, the character of Lucy stumbles into the magical land of Narnia. C.S. Lewis describes her journey through the wardrobe and into another world. My lesson plan involves reading this section and noticing the description given. The children must then use the description to draw their own interpretation of what Narnia may look like. They would then write their own brief description. 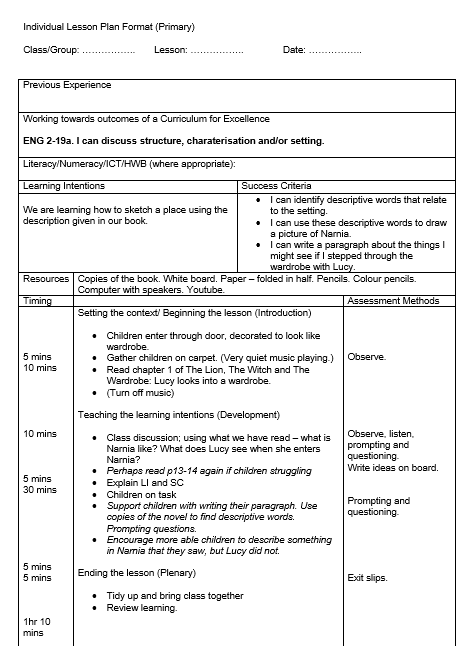 As with my previous attempts at planning, I found the Plenary section to be difficult. When I go into my school placement I will observe how the class teacher finishes her lessons and will try to incorporate some of her methods.

I am looking forward to planning lessons that will be implemented as I feel that putting it into practice will allow me to further grasp how timings and assessment methods work.