During one of our drama sessions, as part of the ‘Developing Effectiveness in Learning and Teaching’ module, we were shown an old suitcase and asked who we thought it belonged to and why.

What did the tattered appearance tell us about who owned the case?

What about the size?

What other clues told us something about the owner?

From just looking at the outside of this case we were able to imagine that it belonged to a young evacuee child. Of course these were only assumptions and once the case has been opened, the contents gave away more clues about who this character might be.

This is a great activity to do with a class as it encourages children’s natural curiosity and allows them to use reasoning to deduce who the character they will be exploring could be. Asking children to justify why they think it is a certain character is a great way of allowing for a deeper level of understanding through discussion. One of the great things about drama, from an interdisciplinary viewpoint, is that it allows teachers to spark their children’s imagination and can make them want to find out more about this character- in this case it would act as a great link to “people, past events and societies” (Education Scotland, undated).

After engaging in this workshop I decided to create my own ‘character bag’ in the form of a treasure chest and filled it with items that a pirate might own (see images below). 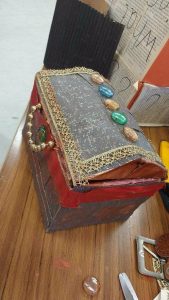 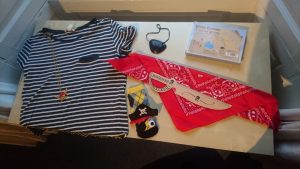 I would use this particular resource with an early years class, which could then link into a story about pirates and further lessons using the pirate theme as a stimulus. An example of this could be asking the children to choose materials for the pirate’s ship that will not sink, which allows for a scientific experiment to take place. This is another example of how drama can act as a stimulus for subject areas across the curriculum.