This is a topic that I have considered writing about for some time now, particularly in the lead up Christmas where music plays a big part in my own life and, I am sure, in the life of many others.

Music is something quite unique to anything else in life. It holds power. The power to bring people together, to share stories of joy and sadness, to move people, to make people move, to encourage stillness, silliness and to celebrate good times. However, there is another power at work behind music that is perhaps of a more controversial nature. For recently, although the good tends to outweigh the bad, I have found that music can sometimes have the power to make people feel excluded or ‘lesser’ than others. You may be wondering how it could possibly be the case, that such a simple thing can contain the power to simultaneously unite and reject?

To put this idea into a context, I invite you to imagine a young child called Sam. Sam spent every day singing everywhere; in the shower, in the street, in the middle of a supermarket, you name it! Sam had a song for everything. It was not only the words and melodies of songs that resonated with this child but the feeling of familiarity and freedom that they sensed when singing- an emotional outlet that could not be otherwise replicated. One day, Sam decided to audition for the school choir. Although a little nervous, they sensed a great feeling of anticipation and excitement waiting to be heard by the music teacher. After belting out their favourite tune with the greatest gusto, Sam looked up to see the music teacher with head in hands. The teacher looked up and laughed, not only did they laugh but they told Sam that they would never stand a chance in the ‘music business’ and that singing really ‘wasn’t for them’. Sam was confused. No one had ever been so brutally honest. Was this honesty? Sam froze to the spot but managed to hold in the tears until home time. Sam did not sing again that night, that week, that month or in fact that year. Whenever the thought entered their head all they could think of was those words telling them they could not and were not good enough. Having lost this outlet, Sam found it difficult to express them self and decided to put up barriers to any experience that may involve singing in front of others.

It was not until many years later, when Sam was at a friend’s birthday party that- after a few drinks- they found them self joining in with a session of karaoke. Sam’s friends watched in awe as they had never seen or heard their friend sing and could see the immense joy in their friend’s eyes as they sang each word with a deep sense of conviction. After the performance Sam burst into floods of tears. They had forgotten the powerful feeling of expressing them self through song. The performance was not ‘pitch-perfect’ but it did not matter. The support given and love felt in that moment was a turning point in Sam’s life. Gradually they started to find more opportunities to sing, and although the niggle in the back of their head telling them they were not good enough was smaller, it always remained.

Although this is a completely fictional tale, I am sure there are many of us who know a ‘Sam’ in our lives; whether that be a friend, a family member, a child in your class or maybe you can relate directly to this experience. As someone who has had a very musical upbringing, this is the kind of story which deeply saddens me. However, it is not something I am unable to relate to in any way. I would argue that, in life we naturally look in longing at those we would consider ‘better’ than us, ‘smarter’, ‘more talented’ and wonder why we could not be something more than who we are. I would therefore argue that it is not actually music itself that has the power to make a person feel ‘lesser’ than who they are, but they language we use around music and the expectations we put on ourselves to always be something more than what we are. It is important that we do not lose sight of the word ‘expressive’ in the title ‘Expressive Arts’. Music is not just about playing or singing every note in tune, with perfect rhythm and largest range. It is about expression and the freedom that comes with letting go of the things that we bottle up inside of us. Have you every been moved to tears by a piece of music? What was it that had this effect on you? Was it the performer’s ability to sing each note perfectly in tune or was it the emotion they conveyed their story with?

In this way, Music and Health and Wellbeing work hand-in-hand, but how often are we encouraging children to think about how music makes them feel? The Scottish Government (undated) highlights ‘feelings’ as a core experience in both of these subject areas.

“I have listened to a range of music and can respond by
discussing my thoughts and feelings.” EXA 1-19a / EXA 2-19a

I would suggest a humorous answer, along the lines of:

“You may not be able to sing like Freddie Mercury but that does not mean you can not sing.”

Followed by the explanation that, by definition, to sing is “to produce musical tones by means of the voice” (Merriam-Webster, 2018). Not to be the best musician in the world or to even produce a recognisable tune, simply some ‘musical tones’, which separate singing from every day talking. I would like to encourage that we value music and singing particularly as an expression of the self, a way of letting out what is inside and learning to accept that this is part of who we are and that we are all enough. It is then that we will be able to feel the truly wonderful power that music holds to bring people together, to share stories of joy and sadness, to move people, to make people move, to encourage stillness, silliness and to celebrate good times. 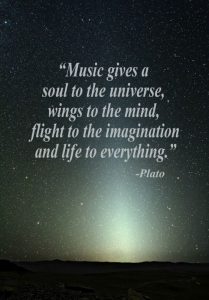