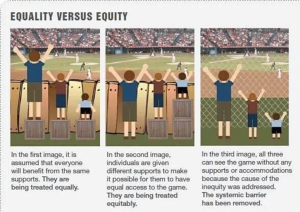 In an earlier blog post ( https://blogs.glowscotland.org.uk/glowblogs/mmkeportfolio/2016/09/20/equity-and-equality-the-difference/ ), I said that equality is not the same as equity: which it is not. But since this blog post I have discovered a new third option (in Vics values class today), and it is that there doesn’t always have to be a choice about if someone is being treated equally and equitably – you can try and remove the cause of the inequality and therefore no one is disadvantaged.

The original picture I have always been aware off, and quite often think of it in situations, but this picture here makes you really think about the fact that there always a simple solution. You just have to remove the barrier.

For me, mental health and disabilities is a topic that is always close to my heart. Since I was 14, I found a love for volunteering, and not just volunteering for Cancer Research or big charity campaigns, but I volunteered for local disability charities. The first time I ever volunteered it was for a fantastic charity called Dreamz4U, the goal was to help children wh

o
are disabled either mentally or physically get their dream. One lucky girl even got to meet Lady Gaga (and this was only a local charity in Edinburgh!). However, I chose Dreamz4U because for me, it doesn’t matter how rubbish I feel, or how hard my day has been because I know that someone else is feeling worse than me, and I know that I can make it better. I volunteered to put smiles on peoples faces, and make sure that while they are with me, I can make them forget the physical or mental pain they are feeling; even if it’s just for a few minutes.

I also volunteered with Guide Dogs Kirkcaldy (which was more for the puppies than actually helping people) and I’ve worked with schools and other places. But my favourite, and the one that really made me think was Down Syndrome Scotland. My time there was great, I volunteered for just under two years (I think!) and it was just amazing. I was apart of a new project called Friends Together – which was to make sure than the two voluntees than I took out became friends and wanted to hang out and eventually do so without my company (if the two friends that met up didn’t get along or didn’t bond, we would find someone else as soon as possible). During my journey I met 3 fantastic guys, but they told me horrible stories of how cruel the world can be. I also met one woman in particular who ha d Downs Syndrome and told me about the abuse she got just from her local shop. She would go in and ask for a newspaper and they cashier would mock her every morning saying that she was “too dumb to read” and “you wont understand”. This breaks my heart, and this is the reason why I volunteer and talk about my experiences so openly. I hate how people can be so nasty, so mean and so cruel and not understand how what they are saying can affect someone. Due to this cashiers words, the lady was too afraid to tell anyone incase they thought she was lying, incase they mocked her too and lived with this for many years. This lady was fully capable of getting a job, being paid and she lived in a house on her own but because she was mocked so much this effected her mentally as well.

Out of this blog post, I wanted to raise awareness on how much a volunteer can change just one life. The lady in question now has a job due to her great volunteers and the 3 guys that I worked with all have jobs now too – when before they were too shy to even speak to myself, they all also have girlfriends and they are best friends too.

But it wasn’t just volunteering, it’s about mental health and disabilities as well. It is about raising awareness of the abuse that goes on, about making sure people feel they can talk to their GP, friends or family if they feel they are suffering with a mental/physical illness, it’s about making sure people don’t judge others because of the way they look/speak/hear/sound/walk etc. and hoping that people open their eyes to everything that is going on around them.