Background of me (according to my Mother).

When I was about 6 weeks old, I had my first ever ear infection. Something that would become a reoccurring nightmare for the rest of my childhood. When speaking to my Mum about this, she said I had ear infections 4-5 times a year, I had perforated ear drums and was on and off antibiotics when I was younger. I started nursery when I was three and a half, and Mrs Adger (my old nursery teacher) spotted fairly quickly that I was struggling to hear. She told Mum she had concerns about my hearing and speech and thought I should see a speech therapist. I went to about 10 sessions of speech therapy, and was told I would ‘grow out’ of my ‘bad’ speech phase.

Between three and a half and five and a half, this was a tough time for me as a little girl, and for my Mum. I had poor vision, my hearing wasn’t great (along with constant ear infections etc), I felt like I always had tonsillitis and I I had several operations in this time. My adenoids came out, my eye was operated on and I had my first grommet (the first of three).

I was meant to leave nursery when I was 4 and a half, but instead was held behind for an extra year. My nursery teacher was concerned I would always be playing ‘catch up’ and I would fall behind. I eventually started school at 5 and a half, and turned 6 less than 4 months later. I was the oldest in my class, and to begin with I was in all the lower groups. My speech, hearing and eyes had taken its toll. Once I was in Primary 2, there were further concerns I still couldn’t hear properly and that my “ths” and “fs” were not being pronounced correctly. This involved more speech therapy, which my Mum was told again would ‘phase out’. Throughout my whole Primary School life, I fell ill constantly with tonsillitis, ear infections and once in a blue moon a perforated ear drum. I don’t ever remember being told I had bad hearing, and I was aware my eyesight wasn’t fantastic as I had glasses! When I was about 15/16, I stopped having tonsillitus as regularly, and my ear infections were basically none existent.

However, I was never aware of my speech. I never knew the difference between ‘f’s and ‘th’s and it wasn’t until a year or two ago, my partner pointed out I didn’t actually say “thank you”, but instead, said “fank you”. I could never hear the difference, and I never had. I didn’t know what he was on about. I still can’t hear it very well, but I am aware that I don’t pronounce my “th”s now and this is one of my biggest concerns in becoming a teacher. I am reading out loud every night, spending 10 minutes a day practising saying words like “thigh” and “thin” and “thick” and “thinking” (and other words). I am studying how to teach this to children, and yet I am still learning myself. This is something I struggle to cope with. This is my biggest fear, that I fail my children in class, or that I fail my placement, and I feel that as a 22 year old woman, I have failed myself.

Glue Ear.
Glue ear is when the middle part of your ear canal fills up with fluid. This can cause temporary hearing loss, and can be hard for teachers/parents to detect as its such a minor loss. Symptoms 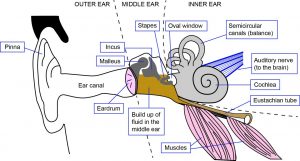 of glue ear can include earache/ear pain, a fever and buzzing sounds.
Glue ear is what I was diagnosed with, and what it means is that my ear basically filled up with wax very quickly. It blocked my ear drum, I would have an ear infection and inevitably I would have a perforated ear drum at some point. A grommet is the ‘fix’ to this, however, I’ve had three and still struggle to hear sometimes. With glue ear, I really urge people to have a look at the website here as it has very valuable and important information on signs, symptoms and just general information.

I could try and put a positive spin on this, and say that as a student teacher I’m glad I realised sooner rather than later, and I am glad I have such supportive people around me.
Another positive spin on this however, is that it puts me not only on the teaching side, but on the learners side. I can actually test out for myself how I learn best to speak better and which methods and techniques work for me.

Hearing impairments however, are just one possible reason that may be stopping a child from speaking, writing or reading. There are hundreds of different reasons why a child may not be able to say “thanks”, read the word “cat” or write the word “mummy”. This is something that I don’t have enough knowledge on now, but I am excited to learn about how to help children identify different sounds, helping children read and write and learning about what can stop children from progressing in their language development. Hopefully, I will have more to write in my next blog post that is about language and will be able to say that I don’t struggle with my “th”s anymore.

This blog isn’t an educational blog post, but it’s more of just my life, and how I have found first year and what will be happening for me over summer.

I currently live in Dundee (which I feel has been a waste of money, as I work at home), but after first year I will be getting a house with my partner of four years. As a 22 year old, I feel I don’t need to go out every night and drink to have fun and my priorities are different from my flatmates. While my flatmates are in classes all the time and drink most nights, I find myself in my room studying, working at home or socialising with my own group of friends. The first year ‘living-in-a-flat-being-drunk-all-the-time’ experience has been overrated for me, and to be honest I feel I just start complaining over tiny things and just wishing I had moved in with Scott this year instead of living in student halls. However, I have met some wonderful people, but for me it’s the new friends in my classes that I get on with more.

University lectures and tutorials have been a brand new experience for me, and this is something I have thoroughly enjoyed! I was at college previous to university, and at Fife College, subjects are taught completely differently. I had never experienced a lecture before, I had never been in a workshop and I have never been so stressed before! I am completely aware it DOES get harder, that I have a long way to go and that I need to take a deep breath, but I think a lot of factors have went into why I have found this first year stressful, which I will talk about later on. My lecturers have been fantastic, and it makes me so excited to have more lectures and workshops with them and I have learned so much in 7 months already, that I can’t wait for the next 3 years! I find my workshops exciting, interesting and it is amazing to have lecturers so passionate about what they do – it makes me want to engage with the lesson and want to try my very best!

Socialising has been so different this year as well. Socialising has been different in positive and negative ways this year and this has added to extra stress too. Back home, I have two best friends, one has moved to Huddersfield to study at the university their, whilst my other friend has a 4 year old and is about to study Sociology at Abertay University (in 3rd year) and for us as friends, we couldn’t be prouder of each other. But having two friends that live so far away from me is difficult, I can’t just drive over like I used to and have a gossip, or study, or watch T.V or play with my friends son. I now have to face time one at a time, and that is even a struggle due to such a bad signal in my flat. However, I have made great friends at university and we get on so well together. We help each other out and we have a good laugh together! The final part of the socialising aspect is the strain it has had on my and my boyfriend. Living away from Scott has been hard because the person I would usually go to with my problems isn’t there to just pop round and talk to. I think it has made us stronger though, and I feel pretty positive about our future (I hate talking about ‘soppy’ stuff openly, so I will stop).

Stressing out is all I seem to do at the moment. I stress about everything and anything, and then stress out more about all the stress. Here is a list, of everything I am stressing about at the moment:

However, I think a lot of these stresses will go after summer. I will be working 6/7 days a week, so therefore will have money, I will hopefully be in a house, I wont be at University therefore no placement or elective and by the time summer finishes hopefully I will be organised.

I just thought that because I hadn’t blogged in a while, that I should do it and try and get into a routine again. But because I didn’t know what to write about, I thought I would write about me and how I am feeling right now. Hopefully will get back into the swing of it.