Week 4 of digital technologies focussed on coding. We used the app Scratch Jr. on the iPad to help explore coding and to see how it could be used in a classroom. Our task this week was to create an interactive story promoting literacy skills using the app. I was a bit apprehensive about coding as I had never done this before and was not sure how easy it would be. Also, I thought it would be a lot harder than it was so was not sure how well children would be able to use it. However, once I used the app, I realised that it could be a useful tool to use within the classroom as it would engage the children well and was easy to use.

This was the first task in digital technologies that I worked on my own. I started off by just playing around with the app and getting used to using the different features. I was unsure of what to create using Scratch Jr. but when I was looking through the backgrounds, I notice that 4 of the backgrounds were similar. I realised that these were to show different seasons, that is when I had the idea to create a story using the different seasons. This would be a nice way to explore what all the different seasons typically look like and what tends to happen in each one. I started by having my character in her bedroom ready to go to school talking to the reader. After she headed to school where she found out she was learning about the different seasons. That’s when I realised one of the downfalls to using Scratch Jr. I was only able to create 4 slides which meant I could not have my introduction to the story and talk about all the seasons in the same story. I ended up deciding to delete the first 3 slides and to just jump straight into talking about the seasons. Looking back, this was probably easier as children can only sit for short periods of time so may not have wanted to sit through the introduction and then the rest of the story. The first slide started in Spring where the main character describes the season and the children have to guess what season it is. The second was in Summer, the third was in Autumn and the last one was in Winter. 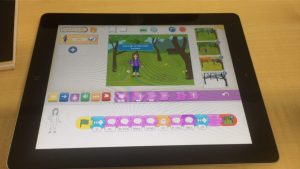 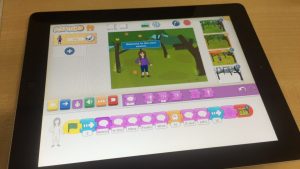 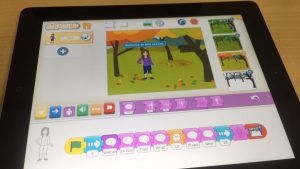 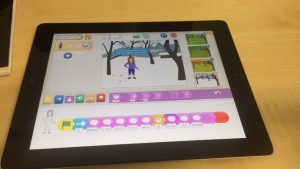 I thought this was a nice use of all the sides as there are four different seasons. I was quite proud of the final product and really enjoyed using Scratch so I am sure children would be exactly the same. One thing I could have done differently would be to ask the children to create one or two of the seasons instead of doing them all myself.

I personally believe that coding is quite an important skill for children to learn. Most children are what Prensky calls “digital natives” and especially when I go into teaching the children will be digital natives, so I think it’s important that children learn how digital technologies work. Children can help to develop their skills using coding programs such as Scratch Jr. as it helps them to think with a more creative outlook and help them to work well with others (The Lead Project, 2014). I agree that it helps them work more creatively but think many different types of work can help children work with others. Although this is still a useful skill to have so if it develops this then that’s also a very important aspect to consider. It can also help to aid teachers by helping them teach many subjects in a different interactive way (The Lead Project, 2014). I agree that this helps to find a new way to teach children different subjects. this can be useful so that the children have a different range of ways to learn.

Overall, I do believe that coding and coding programs such as Scratch Jr. can be useful in schools as it is a different way to engage children and can also keep them more aware of how digital technologies work in this digital world. I really enjoyed the task and would consider using this in schools if they had enough equipment to do this. I believe children would engage well and would enjoy creating their own story.