For week 3 of digital technologies we focussed on multimodality which we had previously talked about briefly in a literacy for understanding lecture. We explored multimodality through ActivInspire which is commonly used in classrooms. Our task for this session was to create a slide or a few slides you could use in a lesson that’s linked to one of the Curriculum for Excellence outcomes and experiences. Before coming to this class, I was unsure what ActivInspire was. After it was shown to us, I realised I had seen this used when I was on placement and while on placement I thought this was such a useful tool to use. It helped keep the pupils engaged and they enjoyed using it since it can be very interactive. Overall, I believe that multimodality is a very important as it can make use of a wide range of semiotic systems which will help more people learn efficiently.

Multimodal texts are texts that incorporate more than one semiotic system (Jewitt and Kress, 2003). The five semiotic systems are linguistic, visual, audio, gestural and spatial. “The multimodality of technology is another reason to use it, as it allows teachers to present an idea in a variety of different ways to help pupils understand it.” (Beauchamp, 2012, p.8). I agree with Beauchamp as I believe all people learn in different ways so by using multiple semiotic systems it will allow for better understanding from more pupils. Multimodality links into the Curriculum for Excellence as they state, “The Literacy and English framework reflects the increased use of multimodal texts, digital communication, social networking and the other forms of electronic communication encountered by children and young people in their daily lives.” This shows it is also important that pupils must be able to understand what is being communicated in a multimodal text as they are becoming used more often in everyday life.

For this task I worked with a partner and we started off figuring out how to use ActivInspire as we both had not used it before. I had only seen it used and was looking forward to figuring out how to use it. We ended up decided to do a grid referencing task that link with the experience and outcome MTH 1-18a, “I have developed an awareness of where grid reference systems are used in everyday contexts and can use them to locate and describe position.” (Curriculum for Excellence, 2015, p.14). We used a field background and added a couple of animals to it. The task for the children would be to say what coordinates each animal was in. 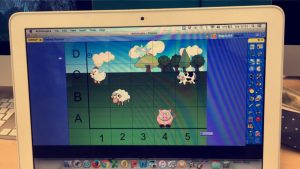 Overall, I struggled with using ActivInspire at first and I found it quite difficult to get used to. However, I think if I spent time using it, I would be able to use it effectively. I did eventually get the hang of certain features but others I still struggled with. I do believe it is a very useful tool to use in the classroom because it can be a very interactive way of teaching children. Since its interactive it will help them learn effectively as it will keep them engaged in the classroom.

Overall, I believe multimodality is an extremely important part in teaching as it can involve many different learning styles together which will insure that many people will effectively be able to learn. I also believe it will keep pupils interested in what they are learning as many semiotic systems are incorporated within one piece of text. I was not as proud of the end result of my task as much as I was for the programmable toys task. This is because I was not used to using this so I knew that it could have been better than it ended up being. However, I still liked the final product and still feel that I will use ActivInspire in the future as it is a very useful tool for learning.