In week 8 we continued on the topic of animation. This time we were asked to plan an animation using iStopMotion which recreates a historical event, represents a geographical process e.g. glaciation, volcanic eruption, recreates a real-life scenario e.g. going to the dentist, shopping or explains a mathematical principle. Since I am a digital native (Prensky, 2001) I assumed I would find this quite easy and very enjoyable but, in the end, I still struggled with this a lot.

Jarvis describes animation by stating it “involves the stringing together a sequence of static images, generally so that they appear to move.” (2015, p89).

Animation can also help to increase learning by:

For this task I worked in a group of five. We first decided we would do our animation on a geographical process, but it took as a while to figure out which one to do. In the end we decided upon a tsunami. We planned out the different scenes using a story board. 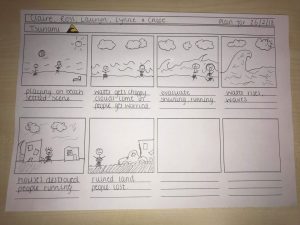 This was an effective way to plan this as we could easily see roughly what we wanted to happen throughout our animation. Our story starts with some Lego people on the beach playing with a ball, which was made out of paper and stick to a stick so it could be easily moved. Then some clouds, made by putting cotton wool onto a stick, came in. After this we had the tsunami warning sign. Then the waves, these were made using blue paper and stuck onto sticks, hit destroying the land, a house is taken down by the waves. A helicopter comes and saves one of the Lego people and takes them to safety. Finally, we have some tsunami facts at the end to allow awareness of how deadly these can be.

Although, I was extremely happy with the final product I found the whole experience quite difficult and frustrating. I do believe working in teams for these kinds of tasks is great however for this one I felt our group was too big as there was not stuff for everyone to do at one time. This left people doing nothing while others were doing stuff. So therefore, feel if I was to use this in a class, I would make sure they were in smaller groups if enough iPads were available. I am not too sure if I would do this with a class as I felt it was quite frustrating and stressful so this could lead to disagreements when used with children. Although, I do believe they would still enjoy it as it’s a different way to create a story.

Overall, animation can have many benefits and can be a useful tool in classrooms to use. However, I am not sure if personally I would use it due to the issues I had with it. I am quite proud of our final product although, I do believe we could have done better. In the end it still portrayed the message we wanted to come across.