We focussed on the use of eBooks during week 5 of digital technologies. Oxford Dictionaries defines an eBook as “an electronic version of a printed book which can be read on a computer or a specifically designed handheld device.” These can be very useful in the classroom as it allows multiple books to be stored. For our task we were to create an interactive summary of a children’s book using the book creator app on the iPads. I have used the book creator app previously in a Literacy for Understanding class so I felt I would be able to use this app effectively. The use of mobile devices, such as iPads, have become very popular in many schools and I will discuss later the different benefits of this.

Like last week I worked on my own for this task and had choose the book “Oi Dog” by Kes & Claire Gray and Jim Field. This book had a frog talking about what different animals should sit on based on a word that rhymes with that animal. For example, dogs would sit on logs. 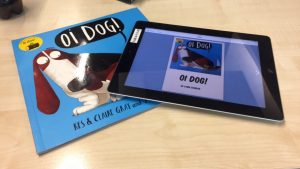 For the task I created, I would get the children to read the book before and then they would use the eBook to answer questions about the book. This would also allow them to develop their knowledge with using the book creator app. 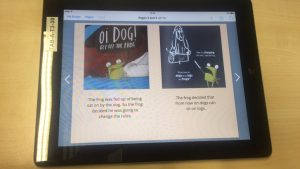 For pages 2 and 3 I summarised the start of the book which explains why the frog wanted to change the rules. 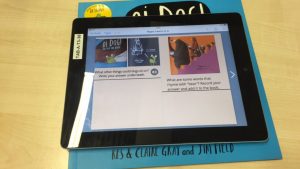 For page 4 I asked what other things a dog could sit on and to write their answers bellow. for page 5 I asked them to record their voices explaining what other words rhymed with bear. This would help to develop their rhyming skill and their own ability to use the app. 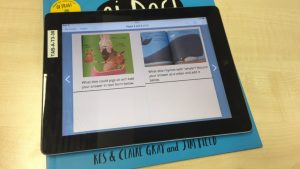 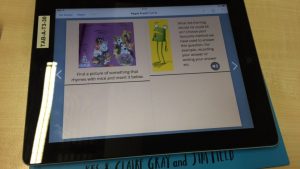 On page 8 I told them to find a picture of something that rhymes with mice and to insert it bellow. On page 9 I asked what the frog decided he could sit on and that they could use their favourite way they had used to answer. 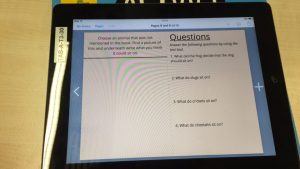 On page 10 I asked them to find a picture of an animal not mentioned in the book and to write what they think it would sit on. On the last page I had some consolidation questions.
I enjoyed using this app and I can imagine pupils in a classroom would enjoy this too. However, if I was to use this task in a classroom, I would choose a different book as this one was hard to summarise as it was more about rhyming rather that telling a story.

Use of iPads in the Classroom

We have used iPads already in digital technologies for Scratch Jr. and we will be using them to create an iMovie and stop motion animation. This only shows some of the potential iPads have if they are used correctly. Many schools are investing in iPads as a way to use technologies in the classroom.

Based on a survey of students by the education faculty at the University of Hull in 2012, many benefits were concluded. 99.6% of pupils believed that using an iPad made the learning more enjoyable. I agree with this as during the times we have used the iPads I have found the activities much more fun and exciting. 93.9% of students said they felt it helped make difficult ideas easier to understand. 91.2% of pupils also said that they felt that they learnt more when using the iPads. Finally, 88.8% of pupils felt that they worked with others more while using the iPads. I think these points are extremely important to listen to as it is coming directly from the pupils who will be the ones earning. Although they may be bias as they might want the iPads to be permanent and they be excited at the prospect of having a device they can take home and use.

Overall, I believe iPads can be an extremely powerful teaching tool as they can provide and different and more exciting way to learn. However, if these iPads are not used frequently or effectively then it might become a waste of money for the school.

Overall, I believe using mobile devices for tasks such as eBooks can be extremely effective and provides a different way for children to learn. Although, if the iPads are not used frequently then it might be a waste to have them. I believe my task went okay but could have been a lot better. I do believe this is something children would enjoy a lot as it was very interactive.