GCU is offering around 250 fully-funded places on individual modules or short courses to help fill a skills gap in the Scottish economy.

The upskilling scholarship opportunities are designed to further develop the knowledge of those working in or seeking to enter, the financial services industry, cyber security, data, renewable energy and virology.

Candidates will become registered GCU students and will work towards achieving modules with portable academic credit via online study.

Supported by the Scottish Funding Council and the National Transition Training Fund, the upskilling scholarships are available to anyone over 24 who is resident in Scotland.

For more information and to view the full range of opportunities, access the links in the comments below.

The SQA Understanding Standards site explains the standards required to meet assessment grades. They host sessions to explain how judgements about standards are made. 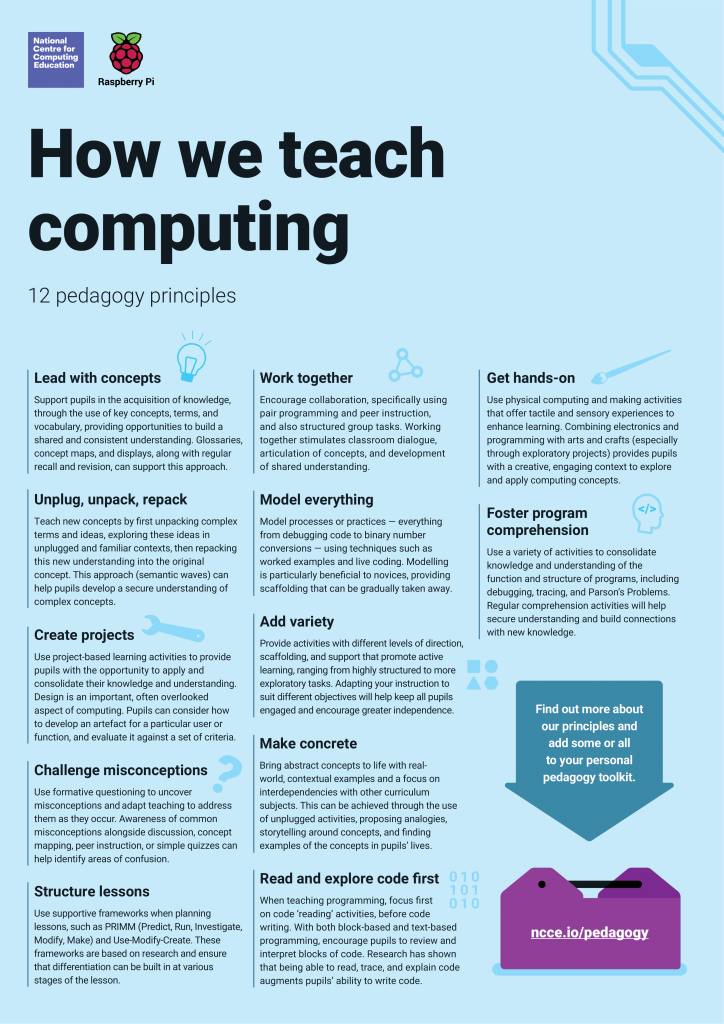 You can download a handy classroom poster featuring all 12 pedagogical principles, to act as a quick reminder for busy teachers. 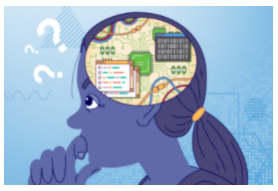 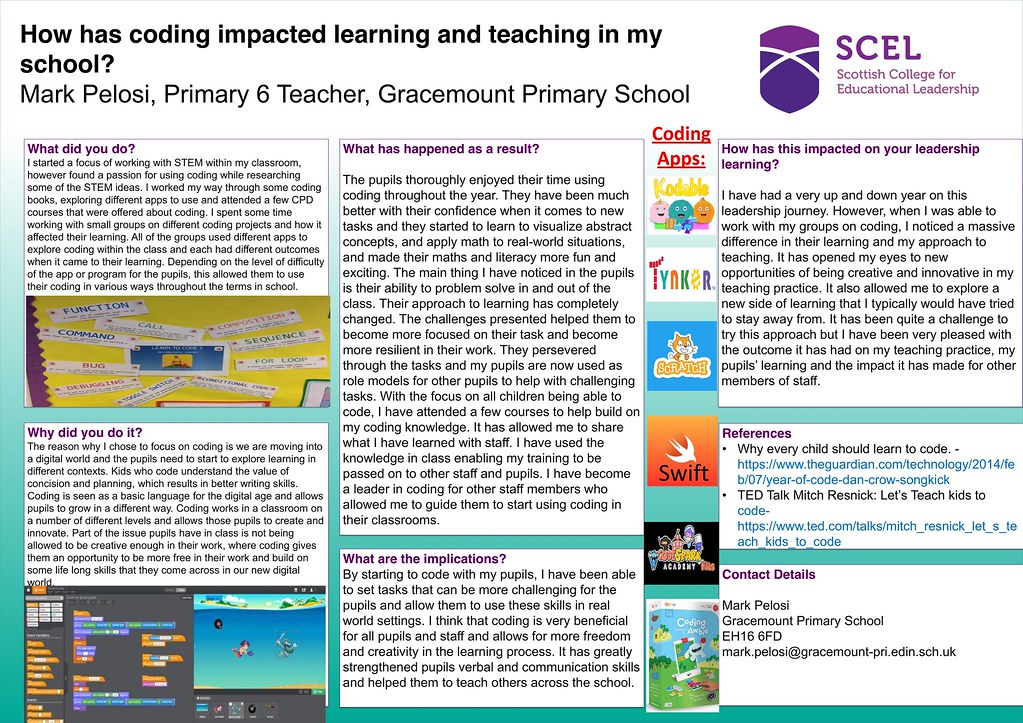 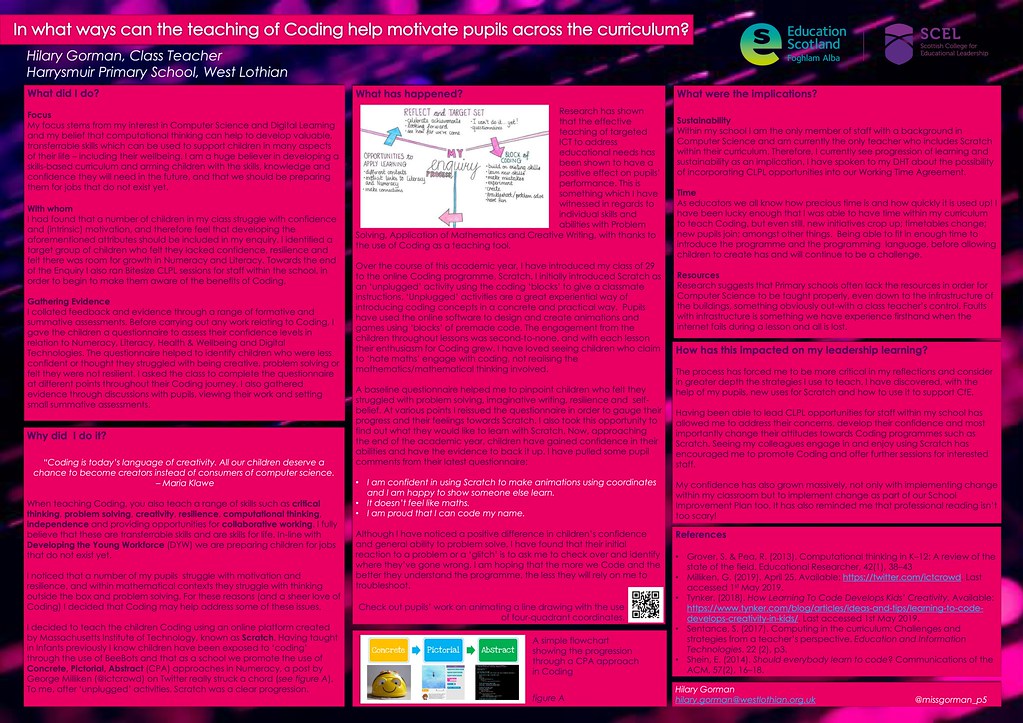 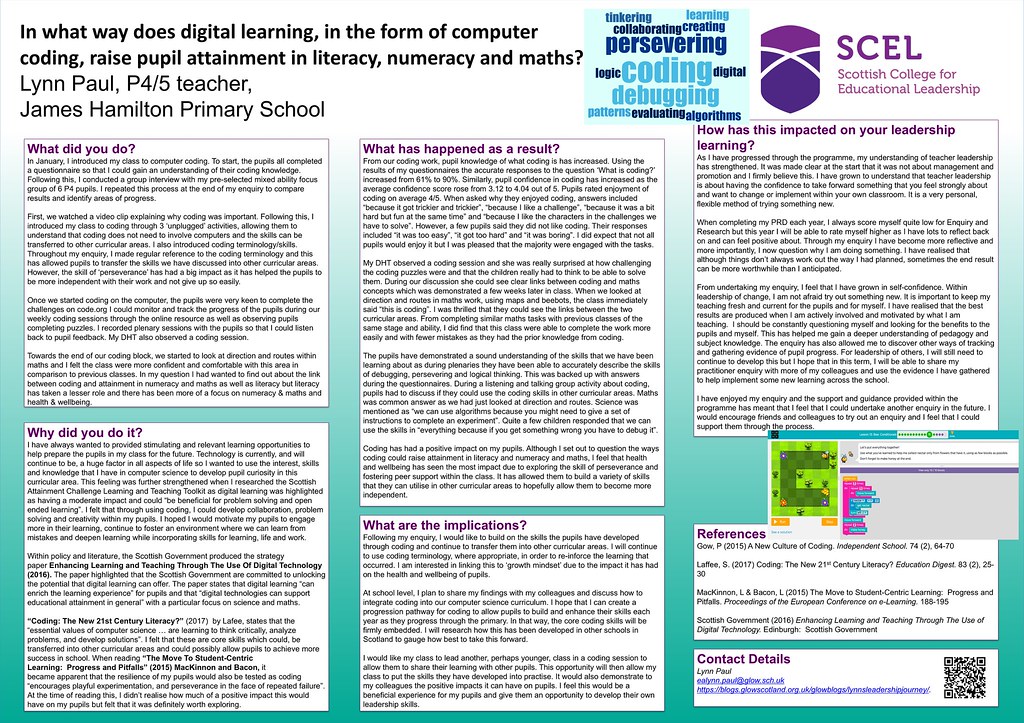 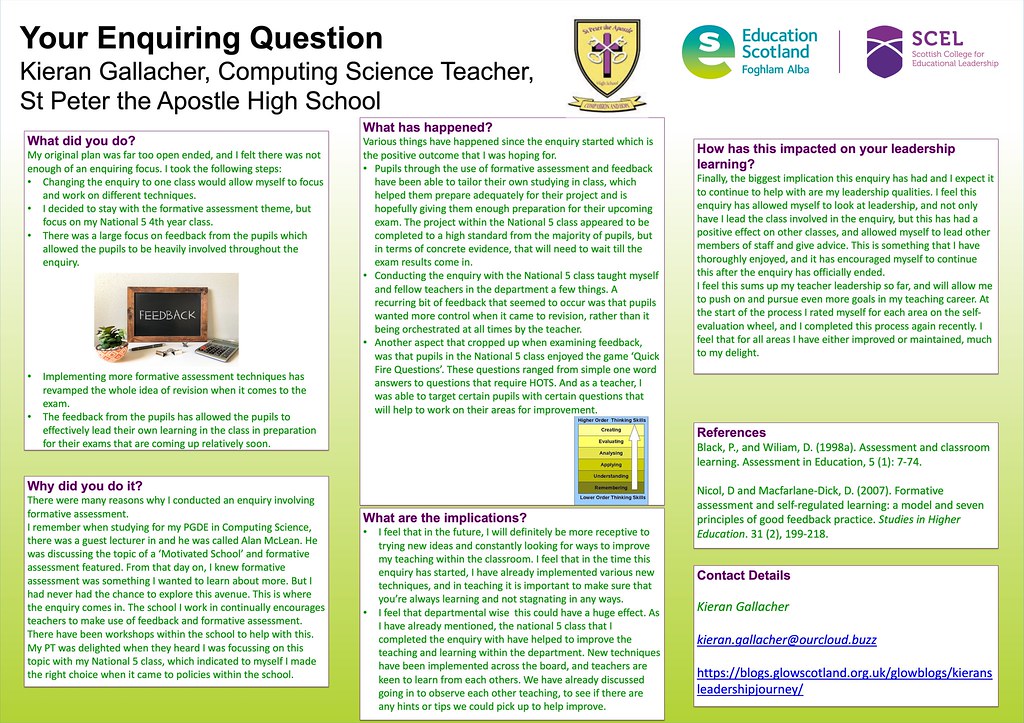 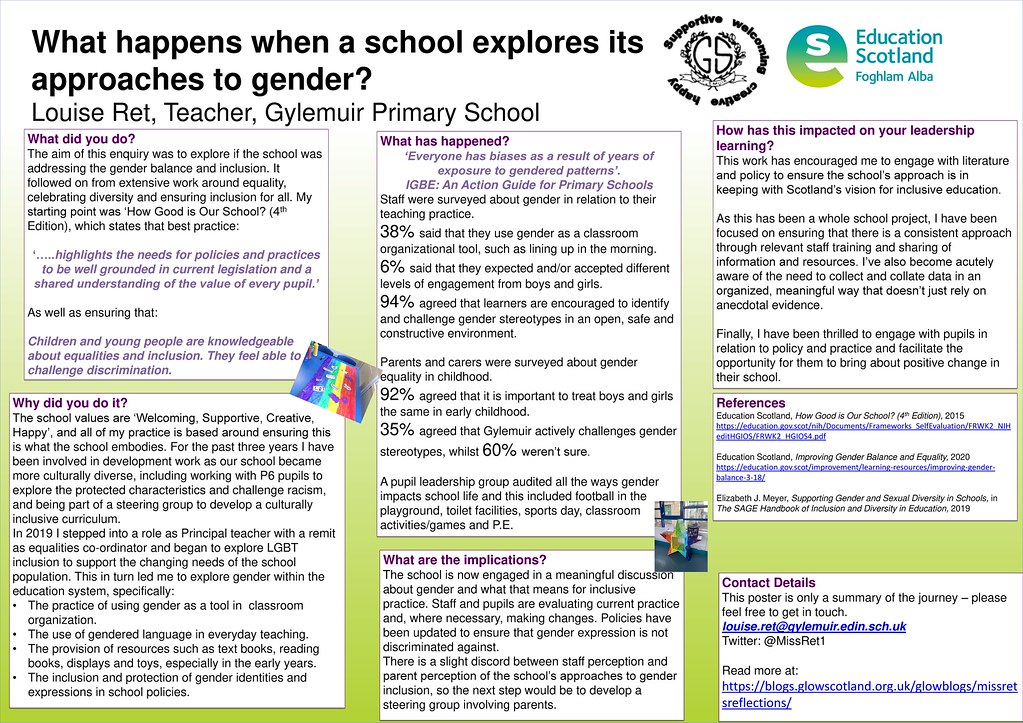 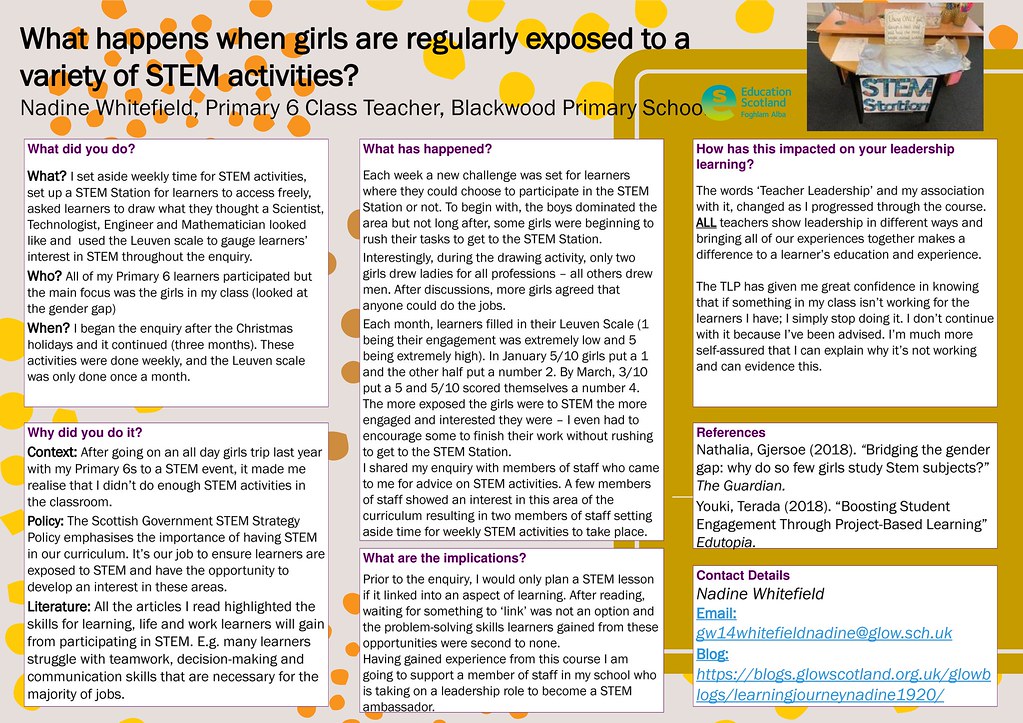 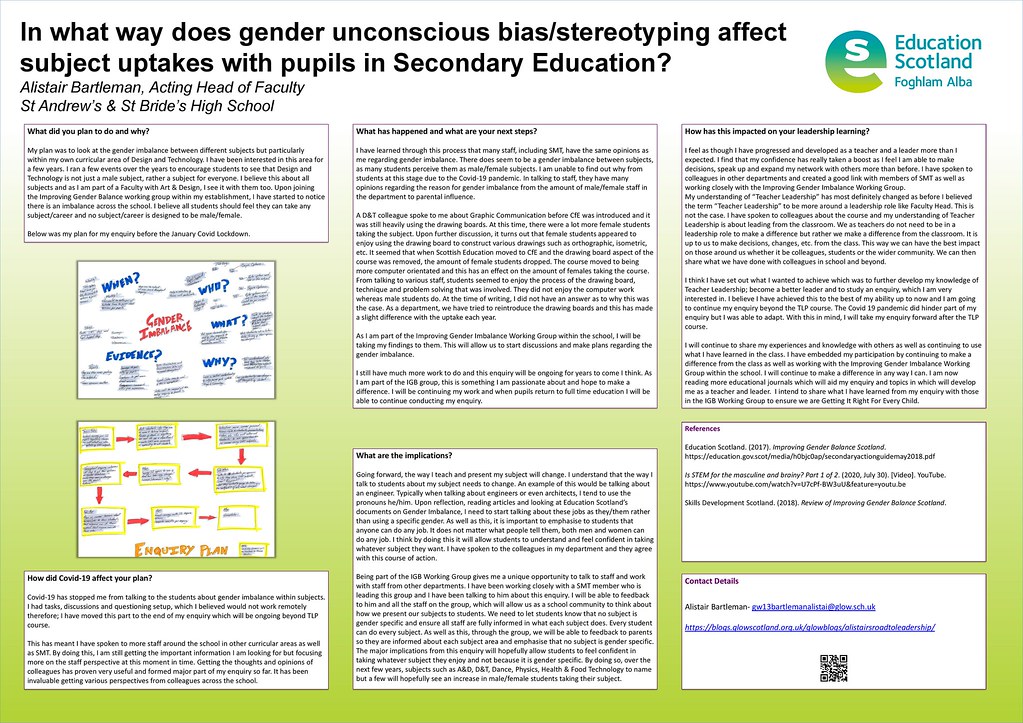 Every primary and secondary school in Scotland will receive 20 V2 micro:bits.  The roll out of these devices started in April 2022.  Read more about the roll out here.

The micro:bit Educational Foundation (@microbit_edu) is a UK-based not for profit organisation with a mission to ‘inspire every child to create their best digital future’.  The foundation helps children participate in the digital world, with particular focus on girls and those from disadvantaged groups. We work in collaboration with educators to create and curate exceptional curriculum materials, training programmes, classroom tools and free resources.

The micro:bit is a very small but functional computer. It has a range of inputs, outputs and sensors built-in. It can be programmed using blocks of code or JavaScript text-based code (you can even write your code in one format and convert it to the other!) on the Microsoft MakeCode site.

Programmable devices can be an excellent way to engage learners with a hands-on experience of coding, which is an abstract concept.

Here is an example of a micro:bit in action:

This is the front view of the original micro:bit (v1)t

This is the back view of the original micro:bit (v1)

This is the front view of the new micro:bit (v2)

This is the back view of the new micro:bit (v2)

micro:bit across the curriculum

The Micro:bit Educational Foundation are looking for primary school (second level) teachers from Scotland to take part in a piece of research about their experiences… END_OF_DOCUMENT_TOKEN_TO_BE_REPLACED

Microsoft MakeCode for micro:bit This site from Microsoft offers projects to get you started with your micro:bit computer – it also has an online micro:bit… END_OF_DOCUMENT_TOKEN_TO_BE_REPLACED

Esports (or electronic sports) is a term used to describe competitive video gaming. With 81% of children playing video games online nowadays, games are arguably a larger part of their lives than ever before.

The British Esports Association (BEA) is a not-for-profit national body established in 2016 to promote esports in the UK, increase its level of awareness, improve standards and inspire future talent. As a national body, their aims are to support esports and provide expertise and advice.

They help to educate parents, teachers, media, policy makers and government around what esports is and what its benefits are. BEA aim to:

There has been lots of work with colleges in Scotland so far but the BEA are keen to support more schools setup, deliver and develop esports clubs for children and young people. Running an esports club is about more than playing games, there is the setup of equipment, recruitment of friends and peers, and all the digital literacy required to produce videos of their games. In fact, capturing gameplay can become a whole production with sounds, graphics and video editing going on to showcase their gaming skills.

The British Esports Association (@British_Esports) has developed a new Parent & Carers Guide in collaboration with the NSPCC, which aims to educate parents and carers about esports and online safety.

This guide has been created to provide information to help parents understand more about the esports industry.

The contents of the guide include:

“At British Esports we’re helping to establish industry standards for safeguarding and keeping young people safe online. Developing the Parent & Carers guide in collaboration with NSPCC has allowed us to celebrate many of the positives around esports, and also highlight important issues around safeguarding and online safety.

It is crucial as an industry that we’re doing everything we can to keep young people safe while participating in esports. We should look to traditional sport, and other established industries, to learn from their ongoing work. British Esports strongly encourages all stakeholders in the esports industry to scrutinise their own practise around their work with young people and prioritise safeguarding and online safety throughout their organisations.’

Find out more about the guide

The Micro:bit Educational Foundation are looking for primary school (second level) teachers from Scotland to take part in a piece of research about their experiences in primary education and the teaching of digital skills.

The research will help inform a programme of activity, delivered by the Micro:bit Educational Foundation, to support UK primary school teachers teaching digital skills, including free CLPL and classroom resources. Your input in to the research is crucial to ensure the programme gives teachers across Scotland the support they really need.

We are looking to recruit teachers who are willing to take part in a short (10 min) online survey in late September/early Oct 2021 and then again in December 2022 (estimated date) and June 2023 (estimated date).

It’s important that we hear from teachers across the UK and so your contribution to the research will be extremely valued.  We want the views of teachers across UK, so make sure Scotland is represented.

Computers are mathematical machines that operate on digital information, meaning the information is either ‘off’ or ‘on’. This is represented in computing with the binary number system, which only uses 0 and 1. These binary digits are called bits in computing.

So, in computing 0 = off and 1 = on. This allows computers to use a series of ‘switches’ to make decisions based on a series of logical decisions (this is what a computer programme or ‘code’ is).

These pages explore and explain binary further:
What is digital data? – BBC Bitesize

This could be explored from as early as First Level, MTH 1-12a states that learners should have ‘discussed the important part that numbers play in the world and explored a variety of systems that have been used by civilisations throughout history to record numbers.’

CS Unplugged has 6 great activities to introduce the binary system to young learners.

Everything on a computer is represented by binary, including images. Every image is created on a grid with each box on it called a pixel. Every pixel is either ‘off’ or ‘on’ and represented as 0 or 1. Once learners are confident with this concept you can even get them to calculate the size of larger binary pictures or coloured images – this involves multiples and conversion of units (every 8 bits is converted to a byte!)

These are some fun unplugged activities to introduce learners to binary representation of images:
How do digital images work? – BBC Bitesize

If you are working with more confident learners, you might want to explore this even further. When the computer uses binary to ‘make decisions’ it is using Boolean logic, which is a form of algebra. Boolean statements are either ‘false’ or ‘true’ – that is they either meet a parameter or value, or they do not. In computing this is represented by binary, so FALSE = 0 and TRUE = 1.

Alan Turing was a mathematician who used one of the first ever computers, called Colossus, to crack the German communications code during WWII, and helping the Allies end the war.

Computers are mathematical devices, it’s as simple as that. The first computers were built by mathematicians (and still are, although they are now called computing scientists). One of the first ‘computers’ was designed by Charles Babbage to perform complex calculations. They have developed unimaginably since then, but computers still work on mathematical and logical principles. So, to understand computers and computing requires numeracy and maths. 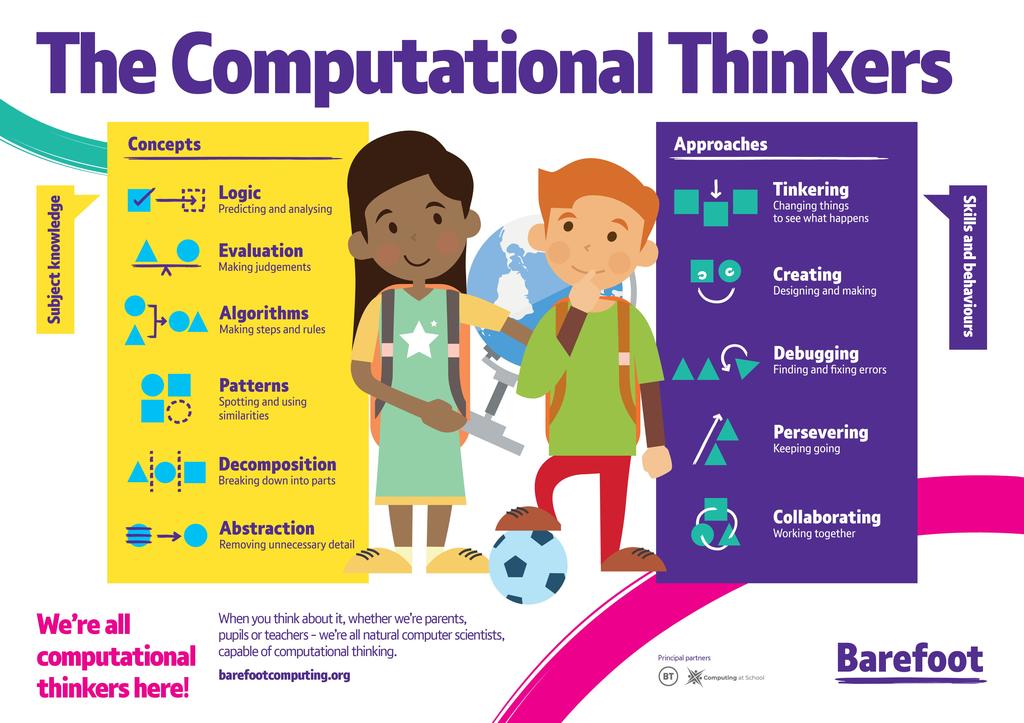 Barefoot provides a wide selection of activities to develop computational thinking in your setting, as well as posters and information to support your own understanding. These are some of the Barefoot Maths activities. You will need to signup (for free) to access:

Bebras runs an annual challenge to test across the UK, with over 200 Scottish schools registered. You can test yourself with last year’s Bebras Challenge or register (for free) and test yourself on challenges all the way back to 2013. Bebras offers challenges for a range of age groups:

CS Unplugged offers a range of units to develop computational thinking and problem solving. Some of these range from magic tricks to understanding the binary number system:

It might also be worth considering the PRIMM (predict, run, investigate, modify, make) approach to solving problems, and coding, alongside computational thinking skills.