This week’s lecture was based on looking at the assignment briefing and looking into what we have to do for it and the blogs. Also, we got any questions about this modules assessment that we had answered by the lecturers.

The first workshop my section went to was the drama workshop. We focused on looking at some more drama conventions such as teacher in role, hot seating and Vox pox. Teacher in role is when the teacher takes part in the drama by changing their character and being able to lead and try to direct the drama subtly by directing questions and answers. One key point to this way of learning is that the teacher has a clear way of showing that they are in role and the drama has started compared to when they are the teacher and need the children’s focus. “In drama, teacher involvement is fundamental.” (Booth, D. 1985). The second convention we looked at was hot seating. This is when one person in the class becomes the main part of the drama and is questioned with everything the rest of the class wants to know. This is like teacher in role, but it doesn’t have to be the teacher who is in the hot seat it can be anyone in the class. The third one was Vox pox which is where the children are in groups and one person goes around acting as a sort of reporter asking the individual people questions about what’s going on and how they feel about it. I think that all the conventions from last week and the three new ones we learnt this week could be used over a term or a year in one topic doing drama. I especially think that teacher in role seems effective as the teacher has a wee bit more control over the direction the drama goes in and the tone of the questions and answers without being the teacher. I also feel that the other conventions are effective too as they allow the children to be creative and express themselves through their drama lesions, but the teachers needs to feel comfortable enough to allow the children to take their learning in their own direction. One experience and Outcome that could be completed doing a series of lessons including a few of these different conventions on drama could be “I have developed confidence and skills in creating and presenting drama which explores real and imaginary situations, using improvisation and script. EXA 1-14a”

The second input my section completed was the music workshop. First, we presented our mind maps that we were to complete from the week before which was about the links between music and other subjects in school. We then went onto looking at figure notes. How they can be used in schools and what they are. I learnt that figure notes have a few stages before the children can learn the conventional way of reading music. It starts with colours and shapes that also have corresponding stickers to stick to the instrument to make it easier for the children to match them up and begin to play. I think this is a very effective way to introduce musical instruments to beginners. As I’ve never played music before I felt this was very helpful and less daunting to start with. We then had a shot at using the figure notes our self. We were using the glockenspiel, my partner and I tried playing super trooper by Abba and jingle bells. One experience and outcome that could be achieved by doing this activity with a primary class would be “I can sing and play music from a range of styles and cultures, showing skill and using performance directions, and/or musical notation. EXA 2-16a,” as the children could use the musical notation of figure notes in order to play musical instruments. I found using the figure note reasonably easy especially since it was the first time I have ever used them. If I was given proper music to try and read and play I would not have done as well and would have been really overwhelmed. 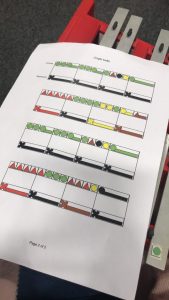 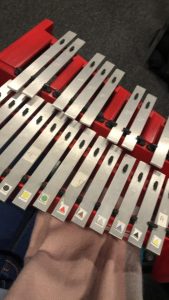 Overall, the theme of creativity, self-directed and paced learning runs through both the subjects of music and drama. In both the workshops we explored the theme of creative learning which runs through both as the figure notes allow the children to learn pieces of music they may never have thought they would have before and in the drama lesson the children are able to let go and become someone else, to let their imagination run wild and have fun. Also, in both subjects the theme of self-direction goes with both. In drama the children can control what direction the theme of their piece of drama goes and in music the children can decide and judge what pace their learning goes at depending on how fast they are picking up the current learning. Overall, I feel that both the workshops today have been very helpful, and I would feel a lot more comfortable teaching either of these subjects to a class now.