This week the two inputs we completed were drama and music. The first being drama where we looked at another five drama conventions. One of the conventions we acted out was mime. This was where we created a piece of drama without using any words just movement and sounds. The next one we looked at was voices in the head, we did this one by reading a story called tunnel, which included a brother and sister so voices in the head is made up of different characters in a drama speaking their thoughts in turn normally about the other person or of a joined situation, they speak in turn but the two characters don’t hear what the other is saying. The next we looked at was monologue which is similar to voices in the head as the character is speaking their mind but in the case it is only one person speaking. I feel that these conventions would be good to look at with children as they are a bit more challenging than the ones we have looked at weeks previous so could be done as a progression as the children go up the school.

During the music workshop we looked at garage band on the macs. We explored the app, and were told to try and create an eight-bar song using the different tools on the app. My song wasn’t very good but for the first time using the app it wasn’t too bad. We then went onto adding a short video that has no sound and tried to add different songs and sound effects that would go with and match the video to make a short clip. I think that these activities would be really effective to do with children probably in the upper school. It brings together the subjects of technology and music. Allows the children to explore the app and experiment with different combinations and different timings of the video. Allowing the children to figure out for themselves what sounds good together and what sounds they think can be put to the video to make it flow well. One experience and outcome that could be associated with using garage band in schools is “I can use my voice, musical instruments and music technology to discover and enjoy playing with sound, rhythm, pitch and dynamics. EXA 1-17a” 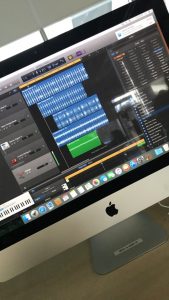 Overall, the key themes of the children exploring things for themselves and creativity in their learning runs through both the topics and the workshops we completed today. In both workshops the activities we completed could be put into a series of lessons for an upper primary school class. In both lessons the children could direct their leaning themselves there was an area of choice in the music lessons on garage band and in the drama workshop the children can direct what themes their drama goes towards. Also, in both lessons, as it has in every week in integrated arts, the theme of creativity runs through as the children get to express themselves through the arts in ways they may not be able to do in other subjects. “when headteachers and teachers were asked to tick five most important reasons for teaching arts in their school, the most highly endorsed category was ‘to develop creativity.” (Fleming 2012, p13). I feel that the survey done for this book and the results back up my opinion that creativity is one of the most important aspects of teaching the arts.