This weeks integrated arts lesson was very hands on and active within the art studio. This week we were linking back to our evocative objects that we have been using throughout the module to base the learning and to bring out emotions and ideas that we may not have if just been asked to do art. So, we were making a concrete poem using 62 words that we had made up about out evocative object. These may be descriptive like my fluffy, bunny etc. or the were emotions such as irreplaceable, heart-warming etc. there were also some words that were about the memory the object brings about mine were hospital, gran, auntie etc.

My concrete poem was in the shape of a bunny’s head. This is due to my evocative object being a bunny teddy. I decided to use wool to do the outline and face features as it gives it a soft fluffy looking touch that represents my teddy and the feelings that it brings about. I then decided I was going to write the majority of the words within the ears of the bunny and put a few special words in paint outside of the bunny to make them stand out more to show their importance. These words were Gran Auntie and then the quote from the song I chose to represent it “Angel in the shape of my mum”. I feel that these words were best to stand out in order for the whole meaning of my object to be conveyed by a glance in very few words. I decided that I would be best to work on the floor, due to the size of my paper and the space at the table due to everyone else working. I felt that because I was working on the floor that I had more room to move and didn’t let the space determine my ideas and creation. This has given me an insight that it would be beneficial for children to be allowed to work where they wanted during their maths lesson in order for them to not be confined by a desk and you may see their imagination flow and be less confined. This concept is discussed in the Room 13: The Movement and International Network (2012) where is discusses the fascination with room 13 which is an unused classroom in a school that was changed into an art studio where the children can work anywhere they want and be as big and bold as they want in the room as it was always messy to allow room for creativity. 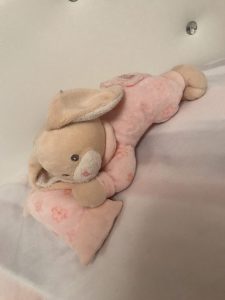 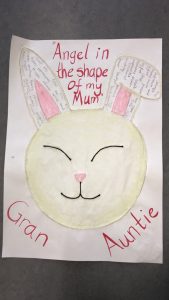 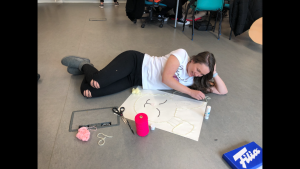 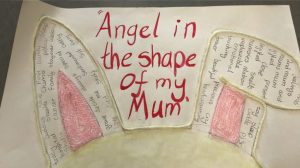 I also think that a concrete poem would be a good lesson to do with children in school as it is cross curricular incorporation art and literacy into one piece of work. it would have to be done over a few lessons and the children would need support in choosing the words to include but I think the children would enjoy it. Maybe not using an evocative object as this may be hard for children to chose and understand as they are so young but maybe by picking their favourite toy or something along they lines.