The first workshop my section completed this week was the music one. This week was very different and special as we had a class of school children in who for the last year had been learning to play instruments such as violin, viola and cello. The children were in to talk to us about how good and fun it had been for them to learn how to play such difficult instruments that they never would have done otherwise and never thought they would be able to play an instrument like I did in school. Also, they were in to teach us to play the instrument.  I have never played an instrument and have no idea where to start reading music or holding the instruments never mind playing it. So, every primary school pupil was paired with one or two university students and they went through step by step on how to begin to learn to play their instrument. I was paired with a little girl who played the viola, and another university student from my class, the pupil began by showing us how to hold the instrument and what the different strings were called. Then by the end of the class we were able to play a few notes on the viola together with the teacher singing and the pupils playing a harder tune. This was very insightful for us as students as it literally put us in the place of the learner and the pupil as the teacher it made us realise how daunting and confusing it can be when you are being taught something new, which made us sympathise with the pupils in our future classes. It also put the pupils in the place of the teacher and would have made the children realise how frustrating it is when the learner doesn’t understand something you are saying or even if they do understand they do it wrong, so it would have made them sympathise with their teacher and understand that sometimes that is the way they feel. I have attached bellow a few pictures of me and my peer trying to play the viola. One Experience and Outcome that could be connected with the learning of musical instruments in class would be “I can use my voice, musical instruments and music technology to discover and enjoy playing with sound, rhythm, pitch and dynamics. EXA 1-17a.” 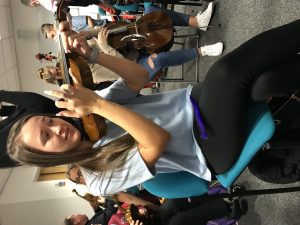 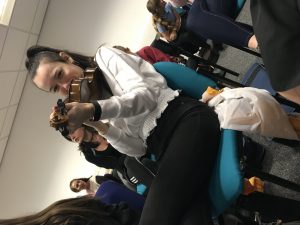 The second workshop my section had today was dance. We started by doing a warm up where we copied Sara’s dance to thriller with stretches incorporated into it. We then went into our small groups and went over the dance moves we made up the week before, we were then given a certain order to do the moves in and we had to learn it. Next we went into a circle and did phone number dances where we made up a dance move for every number 0-9, then we had to do some maths problems to figure out the order we were to do they moves in and add the two dances together, this was good as it showed us a way that maths and dance can be connected an interlinked in the school. We were then given a Halloween picture to make a dance move up for for example ours was a mummy, and then they were put in an order and we learnt them all together and did them to the song ghostbuster. This is all in preparation for the next time we have a dance workshop to put everyone’s dances together and perform it as a class. I have attached bellow a video of the two dances our group put together and then the Halloween one we made up as a class. One experience and outcome that could be connected with a lesson similar to this done with a primary class would be “I enjoy creating short dance sequences, using travel, turn, jump, gesture, pause and fall, within safe practice. EXA 1-08a.”