This week’s lecture we looked at two documents and the importance they have to teachers when they are teaching the arts in primary schools. The first being “Creativity Across Learning 3-18” which talks in depth about creativity and all the different aspects of it. The first section is the definition of creativity, “Creativity is a complex concept which can impact on children and young people in many ways.” I feel that this explain creativity well as it doesn’t give you a clear definition because there isn’t really a clear definition of what creativity is, it is too complex to put into a statement as it can mean a lot of different things to different people. This document aims to talk through the many different meanings and features of creativity and mainly it in school. The second document was “Creativity Money Love” which is many mini essays combined into a book/document. Each essay talks about a aspect of creativity and different ways they can be shown. During the lecture we looked over these two documents but since the lecture I have started to read through them for further study.

The first workshop my section completed was for visual arts. We were focusing on imagination and the way your eye sees things, we did this by finger/hand painting with ink. We were to print with different parts of our hands/fingers, then look at the shape and see what we saw, like when you look at the clouds and you see shapes. Some shapes I saw were a dog and some bugs for example. I think this would be a really good activity to complete with children as it lets them get messy and children love to make a mess and get creative and it allows them to let their imagination run wild and then explain what they see. I have attached pictures of some of mine and my peer’s creations. 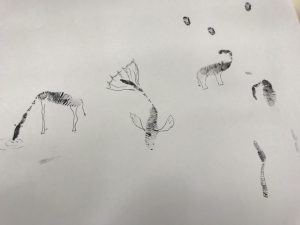 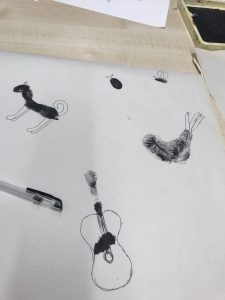 The second workshop we went to was, our first drama lesson. We started by discussing the six ways to complete a drama lesson, role play and improvisation being very similar and basically meaning to act. Then there still image and thought tracking which consists of the people standing in a single frozen position and one person coming out of the image to explain what was happening. Then there was flashback and flash forward, where you dramatise a period of time before the present image and then again for a period of time after to show the significant changes from before, present and future. We were to base our performances on the idea that we lived in a room in the “Windows on the West” by Avril Paton. I have attached bellow a drawing I have completed showing the story we represented in our group’s drama performance. one experience and outcome that could be completed by doing this activity with a school class would be, “I have developed confidence and skills in creating and presenting drama which explores real and imaginary situations, using improvisation and script. EXA 1-14a.” 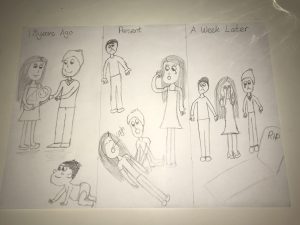