This week in Digital Technology we were learning about coding. We learnt about the Benefits of using coding in the classroom, we did this by using coding through the scratch jr. app on the iPad and using the instruction cards to learn how to do the simple coding instructions. We were instructed to create a short animation that could be used to start off a literacy lesson or to give ideas to children to create their own animation.

We were taught about the benefits of using coding in the classroom. Today, coding is considered a huge part of literature and giving children these skills helps them to be able to understand how a computer works and can help because it can lead into other areas of learning. Areas such as problem solving and communication it also helps with their concentration levels as it takes a lot of thought process to be able to understand how coding works to then be able to do it themselves. (Beauchamp 2012). The only experience of coding before this tutorial was a couple of lessons I did in 3rd year at school in computing on scratch on the computer where we made a maze game. I didn’t realise that coding such as scratch has now been taken down schools to as young as 5 years old as I didn’t realise children were as advanced in computing as what they are.

Scratch Jr. is a straightforward way to introduce coding to young children in primary school. It is described as able to be used by children of 5 years and above. It is used to create interactive animations and games for them to share and use to enhance their learning. Scratch jr. works by joining together blocks that when made into a sequence in the correct order allows the “sprite,” which is the characters used in the animations and games, to be able to move and do other things that the children instruct them to. “Scratch is designed for exploration and experimentation, so it supports any different learning style.” The Lead Project (2014). Scratch was designed to be able to teach children what coding is and how it works but making it fun and interesting for them and easy enough for them to understand and for the teachers to be able to teach. It was also created to help children in other areas such as problem solving and creative imagination as it lets the children bring their ideas to life on the screen then be able to share what they have created with their peers in the class room and their teacher. “Scratch was developed for young people to help them develop creative learning skills for the 21st century.” The Lead project (2014). Skills developed through the use of Scratch Jr. in young people can be:
• Creative thinking skills
• Logical reasoning skills
• Problem solving skills
• Collaboration skills

The short animation I created was about a crab and a frog who went into the sea to look for colourful shells. I created my animation to be shown to the children at the start of a lesson in which they would go on to create a similar animation but with their own stories. This would give the children the idea of the standard of work the teacher would be looking for and would also give them ideas to allow the children to go further and create their own stories or they could carry on my animation with similar characters and story line as the one I created.

I found that this lesson would link to 3 experiences and outcomes on the curriculum for excellence, two from the ICT section and one from literacy. The first ICT outcome talks about the children creating the animations on the devices and being able to understand how to work the app. “I explore and experiment with the features and functions of computer technology and I can use what I learn to support and enhance my learning in different contexts.” TCH 1-04a / TCH 2-04a. The second ICT outcome refers to the creation of their ideas onto the iPad bringing their ideas to life. “I can create, capture and manipulate sounds, text and images to communicate experiences, ideas and information in creative and engaging ways.” TCH 1-04b / TCH 2-04b. The literacy outcome I decided to refer to is “I enjoy creating texts of my choice and I regularly select subject, purpose, format and resources to suit the needs of my audience.” LIT 1-20a / LIT 2-20a. As this refers to the children making ideas and putting them into words to create an animated story on the app.

Overall, I think the use of coding in the classroom is a big benefit to the children as it introduces them to how a game works behind the actual playing of it etc. That they play on an everyday basis. I think scratch is a good and uncomplicated way to incorporate coding and ICT into lessons in the classroom also it engages the children as they enjoy doing things involving technology and that allow them to create things including their own ideas. I would love to be able to use scratch Jr. on the iPad when I am teaching in classrooms. 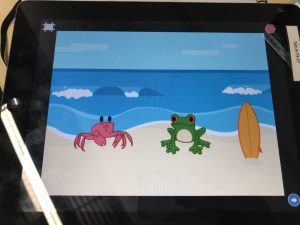 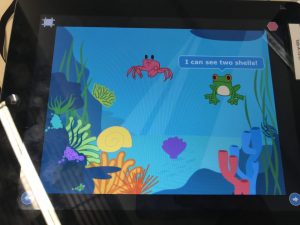 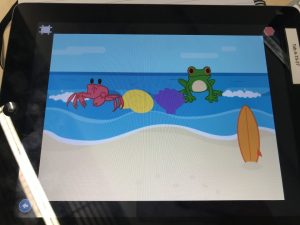 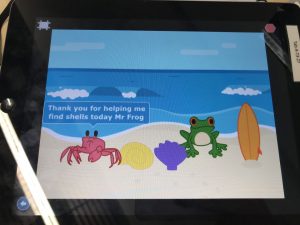