Monday 10th March is Commonwealth Day and Game On Scotland is encouraging schools and youth groups to Sport Your Trainers to show your support for the Glasgow 2014 Commonwealth Games. It’s also a great opportunity to link to wider learning about the Commonwealth and our friends from the Commonwealth Class project have a great initiative which could link very neatly.

Tens of thousands of children and young people, representing hundreds of schools from over 30 countries, will take part in the World’s Biggest Assembly on 10 March. Follow the five easy steps the project has outlined to learn more about the Commonwealth and celebrate the special day.

Follow the five easy steps:
1. Choose a theme for your assembly
a) Life in a Commonwealth country
b) One or more of the Commonwealth values:
• human rights
• protecting the environment
• access to health, education, food and shelter
• gender equality
• importance of young people
• tolerance, respect and understanding
• peace and conflict resolution
• freedom of expression
• rule of law
c) Commonwealth athletes and their preparation for the 2014 Glasgow Games
2. Plan your assembly
Get your pupils involved at this stage. You can find Commonwealth Class resources and films on the British Council and BBC websites.
3. Invite guests
Contact parents, school governors, your MP, local councillor and the media.
4. Hold your assembly on Commonwealth Day, 10 March
If you have a partner school in a Commonwealth country, perhaps you could organise a joint assembly through video link.
5. Tell the organisers about it – before, during and after
a) Tell them about your plans by emailing schools@britishcouncil.org.
b) Contact organisers on the day by email or on social media (Facebook and Twitter) with photos and details of your activity. Use #CommonwealthClass in your tweet.
c) After your assembly, share photos and / or pupil reports with completed permission

Commonwealth Class are searching for fifteen UK schools to take part in a special element of the programme which will see them placed into teams with nine other schools from across the Commonwealth.

Teams will work on a series of monthly collaborative projects between January and May 2014 with prizes given for the best work each month. The project can be carried out within your school as a single class or organised across subjects or year groups. Schools must be able to commit to spending at least one lesson per week on the project. Monthly project activities will lead up to a celebration of the work at the end of May 2014. This could be an online gallery, a film, a book or a blog that will be judged and an overall winning team will be selected. Each school from the winning team will be invited to send one teacher and one student (aged 10 or above) to visit Glasgow during the Commonwealth Games in July/August 2014!

During the project each team will follow the progress of a Commonwealth athlete as they prepare to compete at Glasgow 2014. Athletes that have signed up include Olympic Triathlon gold medallist Alistair Brownlee, Team Scotland athlete Eilidh Child, the fastest man in the world Usain Bolt and the British Council’s own Susie Rodgers. Depending on the athletes’ schedule, schools will have the chance to communicate with them as they train for The Games.

Organisers are looking for the most committed and enthusiastic schools for this unique and exciting project. To apply for a place in a Commonwealth Class team you should complete the application form and return to the address noted within, by Friday 20 December. Places will be given to the schools that in 200 words best say why they want to take part in Commonwealth Class and how joining the project will benefit their school community.

If you are not selected for a team there’s still plenty of opportunities for your school to take part in Commonwealth Class. The education pack is an excellent resource to introduce your class to the Commonwealth and its values, and you can download a PDF copy by visiting British Council Schools Online. The weekly BBC debates are a great opportunity for your students to converse with their peers in real time. The debates so far have been lively discussions on themes including importance of learning languages and island living. At the next debate on Thursday 12 December they’ll be discussing the effects of sport on self-esteem and confidence. Your class can contribute to the discussion on Thursday by emailing comments to the BBC debate moderators at commonwealthclass@bbc.co.uk.

Commonwealth Class is a project of the BBC, British Council and Commonwealth Secretariat. 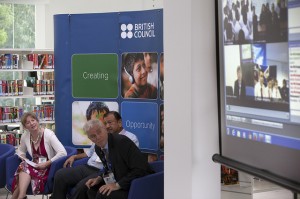 Young Scots and Sri Lankans virtually met at the new building of the British Council in Colombo to engage in discussions about the Commonwealth Games and values.

14 -17 year old pupils at St Joseph’s Academy in Kilmarnock and Stonelaw High in Rutherglen linked up with Holy Trinity College in Kandy, and Colombo schools, Vishaka Vidyalaya and Mahinda Rajapaksa College, to discuss their educational and cultural links with HRH Prince Tunku Imran, President of the Commonwealth Games Federation.

Education Scotland, with the support from the British Council, made the live exchange possible via the unique education tool Glow. The session supported the British Council’s Commonwealth Class programme that provides resources, online BBC debates and interactive activities for schools to mark the run-up to the 2014 Commonwealth Games.

Watch gain:  If you have missed this session you can catch up on it here

The Commonwealth Class education pack is a flexible resource that can be used to support individual projects or joint curriculum work with a partner school.

If you do not yet have a British Council Schools Online account we recommend that you register with them to gain access to other opportunities to develop the global dimension at your school including Connecting Classrooms, International School Award and Language Assistants.

The next BBC online debate will be held on Thursday 14 November to coincide with the Commonwealth Youth Forum 2013. The debate is a fantastic opportunity for your students to engage with their peers around the globe on the most vital challenges and opportunities facing young people today. You can contribute to the debate on the day by emailing comments to the BBC team at commonwealthclass@bbc.co.uk.

And finally, British Council are offering grants of £250 for schools to hold mini launch events on their site for other schools in their area. Events do not have to take any predetermined format but should be 2 hours long and schools should involve at least 10 teachers representing different schools in their area. The launch should be based on the script provided in the Commonwealth Class Education Pack. If you would like to hold a launch event please download and complete the Commonwealth_Class_Launch_Grant_Application  and return to ryan.dunn@britishcouncil.org.

Watch the newly released video with the adventurer Mark Beaumont and join young people from across the Commonwealth to discuss the Queen’s Baton Relay, launched on 9 October from Buckingham Place by her Majesty the Queen. To take part simply share and discuss your ideas between now and the 11 October by emailing commonwealthclass@bbc.co.uk . The BBC will publish pupils’ opinions, allowing schools to respond and converse in real time. For more information go to http://www.bbc.co.uk/worldclass/livedebates/.

On Friday 11 October join a live concert from Glasgow to mark the first stage of the Queen’s Baton at its arrival in India. A live stream will be provide through the BBC Commonwealth Class programme.

Involve your school, year group, form class etc. in a stimulating debate on the most current event around the Commonwealth Games, the launch of the Queen’s Baton Relay.  Video and teachers’ notes have been provided by the BBC here: http://www.bbc.co.uk/worldclass/assemblies/

With around 250 days before the biggest multi-sport and cultural event ever to come to Scotland, we invite practitioners to join us and find out more on how the Commonwealth Games may provide help you to create stimulating learning opportunities across the curriculum and beyond.

The event will showcase inspirational initiatives from schools across the board and highlight programmes available to teachers to ensuring that, together, we deliver a lasting legacy for learning. The keynote address will come from Paralymic champion David Smith MBE.  A variety of engaging workshops delivered by practitioners and organisations experienced in Games Legacy work will provide practical, hands-on exemplification on the impact of using the Games as a context for learning. Workshop sessions will include:

We invite you to join us for an inspirational day of sharing and collaborative thinking around a variety of exciting opportunities by registering for the event on line  or directly with Diane Carson: Diane.Carson@educationscotland.gov.uk

Join pupils around the world for the second Commonwealth Class debate.

In class, watch the film on the Commonwealth Class website about ‘school journeys‘. Talk about this in class and gather some opinions, examples and comments to share with pupils around the world.

Go back to the page at any time between 1100-1300 BST on Thursday, 27th of June to share and discuss your ideas by emailing them to commonwealthclass@bbc.co.uk

Commonwealth Class will publish pupils’ opinions on the site, allowing schools to respond and converse in real time.

The aim is to include as many contributions as possible.

Commonwealth Class is a special initiative that provides teaching resources, online debates and interactive activities for schools to mark the run-up to the 2014 Commonwealth Games. It celebrates the values of the Commonwealth and connects schools and young people as they learn about how to be active, responsible global citizens as part of the Commonwealth family.

The Commonwealth Class education pack is an exciting resource designed to teach young people about Commonwealth values such as rights and responsibilities, protection of the environment, respect for others and what people need to lead healthy lives free from poverty.

Produced by the British Council, the resource pack contains cross-curricular activities, short films and discussion guides with learning outcomes that link to key skills, curriculum subjects and Commonwealth values. Activities include what qualities you need to be a successful Commonwealth athlete, and an exploration of the route of the Queen’s Baton Relay which will visit all 71 countries and territories taking part in the 2014 games.

Get set for 2014 and download the British Council Commonwealth Class education pack today.

Join pupils around the world for the first ever Commonwealth Class debate.

In class, watch the film on the Commonwealth Class website about the ‘woman behind the fastest man alive‘.  Talk about this in class and gather some opinions, examples and comments to share with pupils around the world.

Go back to the page at any time between 1100-1300 BST on Thursday, 13th of June to share and discuss your ideas by emailing them to commonwealthclass@bbc.co.uk

Commonwealth Class will publish pupils’ opinions on the site, allowing schools to respond and converse in real time.

The aim is to include as many contributions as possible.