The last three Commonwealth Class debates before the end of term will take place from 11.00 – 13.00 on the following days

Thursday 5 June:  Our Home and Native Land – Join us for a live debate which features our first Commonwealth Class School Stories competition-winning film! The film was made with a school in Canada and this debate will focus on indigenous people within Commonwealth Countries and how we protect our heritage.

Thursday 19 June: A debate focusing on education which features our competition-winning film from a school in East Kilbride.

From the 18 July to 3 August the Global Diaspora Village will open its doors to host a wide variety of cultural activities and celebrations. A colourful programme from musical, dance and theatrical performances to art workshops and live streaming of the ceremonies will provide something for everyone.

One highlight will provide the opportunity to enter the Guinness Book of Records in a attempt to bring together the largest Gospel Choir ever on 20 July.

The village will also provide a unique space to reflect and relax in the middle of the Commonwealth Games buzzle.

The programme includes the following:

LEAP Sports are proud to be hosting a Pride House in Glasgow during the Commonwealth Games this summer. Located in 14 Albion Street in the heart of the Merchant City, Pride House will play host to a range of sports, cultural and arts events which share as a common theme our vision of breaking down the social and personal barriers which discourage LGBT people across the country from participating in Scottish sports.

Pride House Glasgow will run from 23rd July to 3rd August and will be a place for people to come together to talk, think, relax and have fun. We’re currently developing a great programme of events and working with designers to turn our premises into a unique and unforgettable venue.

In just over two weeks’ time 32 Olympic, Paralympic and World Champions will descend on Hampden Park for the Sainsbury Glasgow Grand Prix on 11-12 July bringing together the best athletic field ever seen in Scotland. The event, which forms a part of the prestigious IAAF Diamond League, will guarantee to get your heart racing with show-stopping performances on the track and field.

With 34 events packed into two action-packed sessions, it is a great way to not only watch athletes warm up for the Commonwealth Games, but also see the world’s biggest names compete across just two days.

So why not book your tickets today with a fantastic offer of £10 per person, and watch the double Olympic and world champion Mo Farah return to the track along with the likes of Christine Ohuruogu, Greg Rutherford, Yohan Blake, David Rudisha and home favourites Eilidh Child, Lynsey Sharp, Laura Muir and Chris O’Hare.
Ticketing Link: http://www.ticketmaster.co.uk/promo/zn87ud

This is our second brief blog in the series which highlights how partners across the Commonwealth, and indeed the globe are using Glasgow 2014 Commonwealth Games as a context for learning.
This month, we are shining a spotlight on Highgate School in Nicosia, Cyprus. Highgate is an international school for learners from 29 different nationalities. Highgate posted the 700th Game On Challenge and the Year 4 class have been exploring Scotland through a cross-curricular project.

At the beginning of the project, learners shared their knowledge of Scotland and famous Scots. They had heard of the Picts and Celts and that the Romans build Hadrian’s wall. As to wildlife, we have Highland Cows, Haggis(!) and Nessy, the Loch Ness Monster (although the children were not sure what a Loch was until it was explained to them!) Turning a spotlight onto Culture, children told tales of old castles, shortbread, tartan skirts(!) and Bagpipes.

This provided an interesting beginning for the children as they went off in pursuit of their challenge to find out more about Scotland. They have been exploring Scottish Culture and identifying a number of famous Scots both past and present who have had an influence across the World.
Children have been gathering all they have discovered, putting this together in a short video of 61 Facts about Scotland which is well worth a watch!

Not just confined with interesting facts, the youngsters in Nicosia have set themselves some sporting challenges too. They have just completed their Swim Relay Challenge and it is clear that everyone is having great fun!

The Queen’s Baton Relay returns to Scotland on 14th June and will tour all 32 local authorities over the following 40 days, before its arrival at the Opening Ceremony at Celtic Park on 23 July – it’s a great opportunity to get close to this Games icon and link it to your learning.

To help you play your part, Glasgow 2014 have created a free online kit for you, your community, school, family and friends. Be the loudest and proudest supporters by making up your own Queen’s Baton Relay megaphones, headbands, banners and more. Cut them out, colour them in and wear them when the relay comes past to support your local batonbearers. Cheer them on in style!

You can also find out when the relay will be in your area on Game On Scotland’s Information and route page. 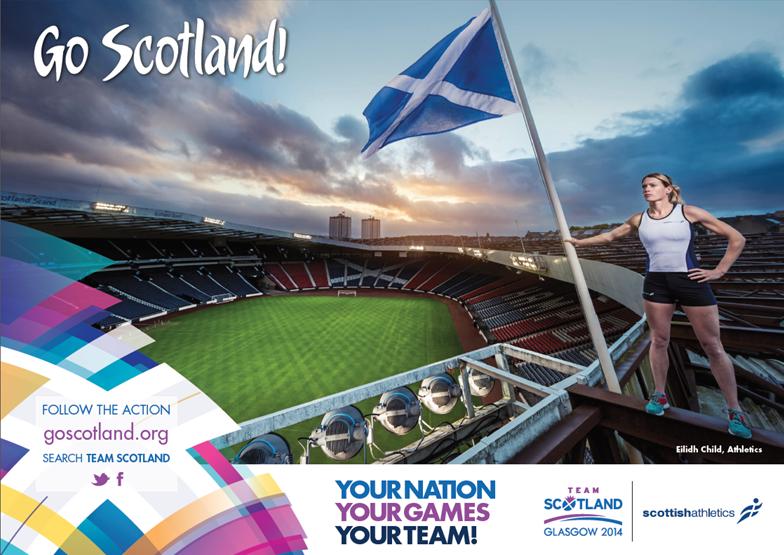 Back in January with 200 days to go until the Glasgow 2014 Commonwealth Games, Commonwealth Games Scotland (CGS) released a new set of athlete images depicting ‘ones to watch’. Such has been their popularity that CGS has made them available as posters to download free of charge so you can get to know some of the faces of Team Scotland who will be representing us in Glasgow this summer.

The 11 photos have been taken at iconic locations around Scotland, with some of Team Scotland’s prospective team members and medal hopefuls.

The strong common theme of the photos is ‘Proud’ and is a clear demonstration of what it means for athletes from across the length and breadth of the country to represent Team Scotland in Glasgow next summer.

The fabulous and striking images have been created by Glasgow photographers Alistair Devine and Stuart Gray and build on the set of images shot at Kelvingrove Art Gallery and launched in April 2013 to mark the start of the athlete selection period (access those posters here).

Calling for the Scottish public to get behind the team, as they start the final leg of their journey to the Games, 400m hurdler Eilidh Child said: “These amazing photos show just how much it means to all of the athletes to represent Team Scotland at the Commonwealth Games this year.

“It was a real privilege to have been chosen as one of the athletes to take part in the project. I hope they inspire everyone to cheer us on all the way and I for one am determined to do Scotland proud next summer at Hampden Park.”

From Eilean Donan Castle at Kyle of Lochalsh to the beaches of Carnoustie and Edinburgh Castle and Forth Rail Bridge the images depict the magic that Scotland has to offer as a place to live, work, visit and of course host major sporting events. The Falkirk Wheel and the Wallace Monument are also featured, with aim to make the whole of Scotland feel part of the Games.

Glasgow based images showcase a number of the Games competition venues in Kelvingrove, Hampden Park and the stunning new SSE Hydro, whilst the cranes of the BAE Systems shipyard at Govan on the Clyde remind us of our strong industrial heritage and technological innovation.

The images will be used throughout Team Scotland’s back the team campaign – ‘Go Scotland!’

Images for the remaining eight sports will be released shortly.

You can find out more about Team Scotland on the Game On Scotland website.

On 15 May, school pupils from across Scotland will be inspired to ‘be their personal best’ by meeting and learning from dozens of Scotland’s top athletes, including Olympic and Commonwealth medallists.

Two world-famous Scottish sporting heroes will also be revealed and will take part on the day!

Through a series of workshops, the event aims to inspire young people to be successful in life and show them that everyone has it in them to succeed. The athletes will help the pupils understand how to learn through failure and how success comes from sustained effort.

No matter who you are, where you’re from or what you’re good at, everyone has it in them to be their personal best.

The session will include the following components:

Register for or join this unique Glow Meet here. 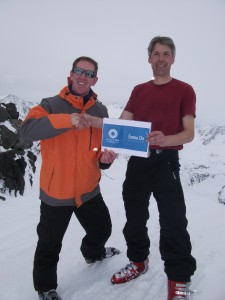 Over the Easter break the highest ever Game On Scotland plaque presentation took place during a spectacular tour across glaciers in the Stubai valley (Austria).  At over 10 000 feet (3254m, Obere Hölltalscharte) Ian Menzies surprised his fellow mountaineer by pulling the plaque  out of his rucksack.  Game On DO K Mayer commented:  I nearly fell backwa……!

Since then Game On Scotland has reached the following peaks on its magnificent journey:

We have over 750 registered Game On Challenges anything from school programmes to cluster Games.  We awarded over 120 plaques in recognition of the exciting learning experiences provided by schools across the Commonwealth.  The first international plaque (Nr. 100) was handed out by the Cabinet Secretary Shona Robison in Canada last week.  Game On Scotland sent Clyde to over 160 schools, arranged more than 40 athlete visits to schools across Scotland and provided over 6500 learners with the unique opportunity of having their artwork displayed in bedrooms of athletes and officials (see attachment).

With just 10 weeks to go before the Opening Ceremony we now have recorded over 4000 direct registrations with GOS, more than 35 000 downloads and an estimated half a million young people involved through Game On.

I leave you with the very latest gems of our programme:

Architecture and Design Scotland will host a seven-month programme of exhibitions, events and activities to get behind the scenes of the environmental legacy of the Commonwealth Games 2014.

Green2014: The Environmental Legacy of the XX Commonwealth Games in Glasgow from Architecture + Design Scotland on Vimeo.

The rich schedule of events and exhibitions celebrates and showcases the range of environmental legacy projects being delivered by the Scottish Government, Glasgow City Council, The Games Organising Committee and partners throughout and beyond the 2014 Commonwealth Games. It demonstrates how these projects contribute to the success of the games and will act as a launch pad for a legacy that will benefit the citizens of Glasgow, the people of Scotland and visitors for years to come.
The programme at Architecture and Design Scotland will allow visitors to:

This interactive exhibition will allow you to get involved in events, workshops and active architectural tours – the GREEN2014 programme will have something for everyone!