On 30th October 2014, Glasgow City Chambers was the fantastic venue for an action packed day of activity to celebrate the culmination of Game On Scotland. Over 100 children and young people from schools across the country made it along to this special event which showcased some of the many Commonwealth Games-themed learning experiences enjoyed by children throughout the country.

The event was hosted by Young Ambassadors Sam Donnelly and Robbie Henderson. Along with fellow ambassadors Paige McMahon and Rachel Law, they each shared their own unique experiences and perspectives of Glasgow’s Games.

Paige spoke about her role as a Young Ambassador and the sense of pride she felt whilst representing her local authority in the Opening Ceremony of the Commonwealth Games. Sam urged young people to grasp every opportunity available to them – “…just say yes and be open to new experiences.” Robbie reflected on overcoming personal challenges and disappointments whilst Rachel shared her passion for encouraging and motivating young people to become more active.

The day gave a real snapshot of the different ways in which schools across the country have created inspirational learning opportunities for children and communities around the context of the Commonwealth Games. Youngsters from Kinlochbervie ASG shared their cluster challenge and St Thomas’ gave us behind the scenes information about their highly successful East 40 charity single “Let the Games Begin”. Rathen Primary described their exploration of the Commonwealth values of Humanity, Equality and Destiny and how these contributed to their understanding of Global Citizenship.

Young people were definitely the focus of the day with teams from schools leading Learning Zone activities which included science, biomechanics, equalities and teamwork. We were also treated to some fantastic performances – the Sgoil Ghàidhlig Ghlaschu (Glasgow Gaelic School) thrilled us with their rousing Haka whilst Bonnybroom Nursery’s choir treated us to a rendition of a song inspired by the Commonwealth Games.

Active Zone activities in the afternoon ensured there was little time for rest. A round robin extravaganza of boccia, indoor curling, water relay, hockey and ball throw challenge kept everyone on their toes. 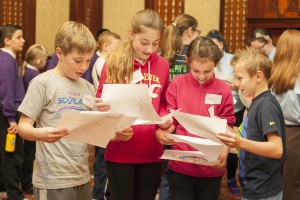 Time is running out to receive recognition for all the great learning you did to celebrate the Commonwealth Games. With just 3 short steps your school could be on course to gain this unique award. We know you are busy, so have made things super easy
1. Download the Claim your Plaque form
2. Complete the details – this should take no more than 10 minutes
3. Email it to enquiries@gameonscotland.gov.uk – job done!

Hurry though as cut off dates are fast approaching – get your form to us by 5pm on Monday 1st December and in no time at all, we will process your application and get your very own Game On Scotland Plaque on its way to you before the end of term.

Now that we have all had some time to catch our breath after the magnificent Glasgow 2014 Commonwealth Games, Young Scot and Legacy 2014 are working together to offer young people involved in the Legacy programmes and projects further opportunities to shape their communities.

The partnership is delivering a short programme to engage young Legacy 2014 volunteers and participants to celebrate and document the work that has been done, gather ideas to build upon the legacy even further and make connections to immediate opportunities.

PODIUM workshop events are open to those that participated (aged 14-26) and volunteered in Legacy 2014 programmes and initiatives and programme/project leads/workers.

There are 4 events being held across Scotland later this month. To ensure your programme/project is represented please share the most relevant location(s) with your contacts and encourage participation in one of the upcoming events detailed below:

We look forward to seeing you.