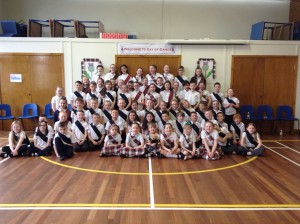 The day was a great success with lots of fun had by all and some fantastic dancing on display. The pupils from all schools worked well together, helping each other through the dances. We were treated to a creative Scottish Dance experience from California Primary at the interval. A huge thank you to Avonbridge for hosting and to all participants for performing so well on the day. We would also like to take this opportuity to thank Tesco in Camelon for providing the water and snack for the day. 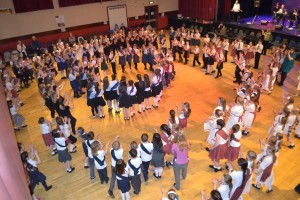 Morag Young and Morag Simpson, Physical Education Lead Officers from Falkirk Council Curriculum Support Team organised a Gymnastics twilight for primary class teachers and specialists. This course was led by Anne Murphy,  from Education Scotland and specifically focussed on using apparatus. Anne demonstrated how to provide a progressive Gymnastics programme focussing on the Significant Aspects of Learning in PE from Early Level through to Second Level.  This was a follow on course from the first session with Anne in February, focussing on  developing practical content with literacy and numeracy links.

“This was a wonderful course to support teachers, such as myself, when working to build confidence in our own practice.”

“The opportunity to learn more about the various techniques and how to carry them out properly was excellent and very enjoyable.” 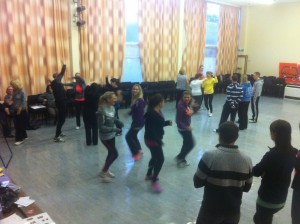 The day provided the opportunity for delegates to expereince  a combination of  practical workshops and presentations from both Education Scotland and HMIE. Feedback from all sessions has been extremely positive with the opportunity for Q & A sessions being greatly appreciated by all.

Morag Simpson and Morag Young are hoping to provide the same opportunity at the next inservice day on the 2nd May 2014.

Here are some examples of feedback given:

” A very interesting day with lots of fun ideas and activities”

” Great having notes and resource links” 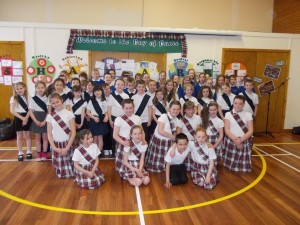 Yvonne McBlain and Malcolm Wilson of Falkirk Council Service and School Improvement Team have created a new interdisciplinary learning blog. Yvonne will develop and maintain this blog as a major element of support for IDL across Falkirk Council education establishments.  She is working hard to fill the blog with useful material and valuable IDL practice. Click here to visit, and contact yvonne.mcblain@falkirk.gov.uk if you have suggestions, ideas or  interdisciplinary learning practice to share.

Morag Young and Morag Simpson, Physical Education Lead Officers for Falkirk Council Curriculum Support Team attended the  inaugural conference for the Scottish Association of Physical Education Teachers (SATPE). This was held at  Tulliallan Castle on Saturday 2nd November 2013.   The occasion highlighted the importance of professional dialogue, the sharing of good practice and the unity of practitioners across the country. The key note speaker was Paralympian David Smith, a truly inspirational individual.

Presentations from the event will be available from the website shortly. www.SATPE.co.uk

Individuals can join SATPE for £25 or a primary school membership costs £40. For this membership you will gain access to an online journal, teaching resources, notification of relevant events and discounts from association sponsors.

The PE Lead Officers across Scotland are encouraging schools to join the association to assist their professional development in reaching the 2 hour PE target. 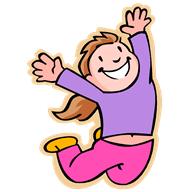 Morag Young and Morag Simpson, Physical Education Lead Officers for Falkirk Council Curriculum Support Team delivered a twilight course to primary staff on the  Better Movers and Thinkers Programme. This programme is an innovative, exciting and challenging movement and learning programme for Physical Education, that focuses directly on enhancing the links between moving and thinking and how these elements scaffold the development of physical performance and inter-disciplinary learning.  The practical content was delivered and developed in response to the questions and identified needs of the participants.

Feedback was extremely positive and participants are looking forward to the follow up session in February.

Examples of some feedback are shown below:

“Really interesting course with many ready to use ideas, can’t wait to try with my class!”

” ..will implement right away, very motivational” 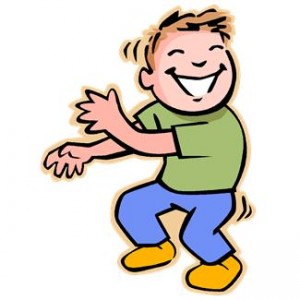 Morag Young and Morag Simpson, Physical Education Lead Officers from Falkirk Council Curriculum Support Team organised a Dance twilight for primary class teachers and specialists. This course was led by Anne Murphy,  from Education Scotland. Anne demonstrated how to provide a progressive Dance programme covering the Physical Education Experience and Outcomes, focussing on the Significant Aspects of Learning in PE from Early Level through to Second Level.  She also showed how to incorporate numeracy skills, literacy skills and topic work.  This was a practical course and participants enjoyed the way in which the course was delivered in an extremely inclusive and creative manner. Course participants were able to identify that this method of teaching Dance  would ensure a positive learning experience for all and highlighted that you didn’t need to be a dancer to teach Dance!!

“Fantastic ideas for creative dance which I could see working with my class, they would be  motivated and would get a lot of enjoyment from it”

“ How to allow pupils to take ownership and problem solve”

“I did two dance twilights last year and both were difficult to implement. This one was fab!