The group left from Horgabost beach with a SW wind and on the last hour of the ebb tide and  after a bumpy crossing over Luskentyre bay, we paddled around the headland of

Bienn Dubh and onwards to the Island of Easay.   All of the group coped well with the following wind and the small swell that was coming from the SW and the group are looking forward to the possibility of an extended

overnight expedition on their next trip.

Well done to Duncan, Peigi and Alisdair who were placed 2nd, 1st and 3rd respectively overall in the Cross Country Series.

Binns, Jacob Johnson and Anish Toor who ran well in 2 out of the 3 races.

well in their races.

In the under 15 girl’s race SRAC’s Harris girl Peigi McKellar had her best run at the National Championships. Peigi’s training and race plan came together well on the day as

she ran an easier first half of the race and upped the work rate there after, batting down the home straight to take a fine 14th place from 71! 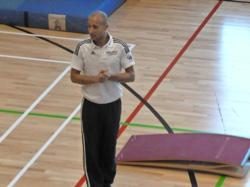 Steve Frew, Commonwealth Gold medallist in  Gymnastics visited the school at the end of January to coincide with the opening of the new sports hall.

As an athlete mentor for the

rts- Living for Sport Project, he delivered a motivational presentation at a whole school assembly talking of his long athletic journey from his first ever medal success as a 7 year old boy to him winning Gold at the Commonwealth Games in Manchester in 2002.  His

speech was entertaining,  insightful and focused on how ‘we can all achieve our best’.

Afterwards, Steve demonstrated his Gymnastic skills with a selection of vaults including a dive

He then worked with the S4 Skills for Work Adventure Sport and Recreation class in helping to deliver a Gymnastic lesson to the P1-4 Gaelic Medium class.

We look forward to having Steve visit us again in the summer term.