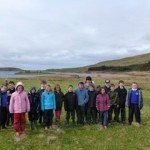 On Thursday the 16th of May Port Charlotte School went on an excellent trip to Finlaggan and Dunyveg. P5/6/7 went with Mr Mackie, Mrs MacTaggart, Mrs McLellan and Mrs Coughlin. We went because our topic is the Lords of the Isles and we wanted to know more about them.
We found out that the Lords of the Isles were only MacDonalds, they could not be MacLeans. Women couldn’t be Lords of the Isles either in those days. They ruled right down the west coast.

At Finlaggan we saw the chapel where the children and ladies were buried. Mr Bell told us all about it. We saw the Great Hall it must have been really big. We also saw a strange stone called the footprint stone. They think the person’s foot had to fit the stone or they couldn’t become the Lord.

At the dangerous but amazing ruin of Dunyveg castle we saw where the boats were brought up through the gate. We saw where the houses were, we saw a well and a lot of odd rock lying about. Here are some of the facts that we read and were told about; all of the clans spoke Gaelic, they used bull’s blood as glue and had big feet, in midsummer they had a council meeting on an island next to Finlaggan. When the Vikings were there they built a big fence around the island, Finlaggan was home to the Lords of the Isles for over four hundred years. We found out a lot more but it is too much to write down.

After that we went home. Our wonderful day had come to an end! I really enjoyed it. I’d like to thank Mr Bell and Mrs Coughlin for telling us about it. I also thank Mrs McLellan, Mr Mackie and Mrs MacTaggart for taking us on the wonderful trip.
By Amy