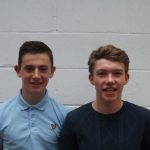 ON the 4th May a group of senior students and one of their teachers from Lochgilphead High School, bravely shaved their heads for charity.

The event which took place in front of the public at the Argyll Inn on Sunday was in aid of the local cancer charity, Rainbow Valley. The group of fundraisers included fifth year student Lee MacLean, fourth years Coll MacCallum and Patrick Feeney, as well as English teacher Ronnie Cameron.

When interviewed, the pupils stated that they were all nervous about the outcomes of shaving their hair off but would feel immensely proud of themselves afterwards. Lee particularly mentioned that he valued his hair but was spurred on by the fact that he “can prove to friends that I’m not vain!”
The boys then went on to say that they had full support from their families for giving up part of their appearances for such a good cause. However, the guys predicted that they would later have to face the consequences of getting “slaps on the head” from friends as well as having to wear more hats!

Mr Cameron has been taking part in Rainbow Valley fundraising events ever since it began and remains determined to do so. When the subject of going bald for charity was raised he was immediately hit with sponsors, and felt encouraged by the fact that some of his own students were taking part. Mr Cameron stated, “I admire the younger ones for doing something positive for the charity I have a connection with,” later adding that he was, “glad he could contribute in any way.”

The event was a great success, with the boys and Mr Cameron raising around £1300. Patrick said; “The atmosphere was brilliant and scary, although I now feel really proud of myself.” Coll added, “Even other individuals from the public took part!” The LHS group feel delighted with the outcome even though they know they will be ridiculed for days. 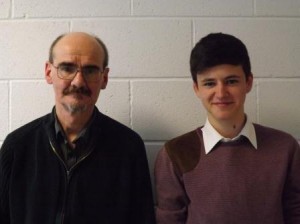 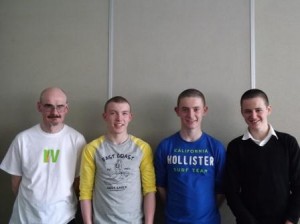