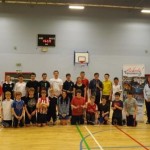 On Thursday the 2nd May, John Shearer of Badminton Scotland came to the Joint Campus to present the High School with the ‘School of the Month’ award for April 2013. Jillian Gibson, Active Schools Co-ordinator, nominated the High School largely due to the success of the after school club which ‘is the most popular club currently running at the school, with over 30 pupils attending each week.’


John presented a trophy, a t-shirt and racquet signed by the national squad to Alistair MacVicar, one of the school’s Young Sports Ambassadors, and made special mention of the pupils’ contribution to the club’s success. ‘Volunteers giving up their time is common to all the schools who have won this award,’ said John, ‘and clubs run by pupils for pupils help provide excellent role models for younger students.’

The award is open to all schools in Scotland and recognises that, at Lochgilphead, badminton is a big part of the PE curriculum from S1 – S6. The strong after school club is run by pupils, many of whom have completed the Badminton Basics course, and players participate widely in competitions. As John said to the pupils in attendance, ‘You’re a great club!’