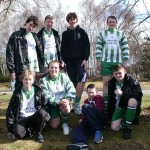 Oban has been represented at the annual Aviemore National Shinty Festival every season since its modest beginning over 11 years ago.
In that time it has grown into a countrywide event attracting schools as far apart as South Ayrshire and Inverness. Oban has always entered teams who compete well, and this year was no exception.
The High School squad reached the final for the second year running and were again unfortunate to come up against Ayrshire’s Park School, an older and physically more powerful outfit. An unfortunate injury to key defender, Daniel Day, ruled him out of the knock-out stages. Nevertheless, Oban did enough to overcome old rivals, Drummond School from Inverness.