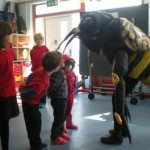 Lismore Primary School held a very enjoyable “Busy Bee Week” from 22nd – 28th April.
The week began with a visit from Generation Science (Edinburgh International Science Festival’s Outreach programme) who performed their show – “Little Giants”. This was an interactive workshop where Buzzy, the giant honey bee and a bee keeper introduced the children to the amazing world of bees.

As well as looking at the structure of the bee, the children learned about the waggle dance, the organisation within a beehive and how and why bees are so important for the survival of plants. The children found out about the different bees which live in the hive and were fascinated by the beautiful wax honeycombs that they were shown. Later in the day the children took a closer look at some flowers, to find out exactly where the nectaries were and where the pollen was made and transported.

The children were lucky enough to visit a real bee keeper on the island and set off across the fields to view the hives and bees. Jennifer Baker showed the children her bee hive set in a sheltered spot up on the moorland behind the house where the bees had plenty of plants from which to collect pollen and nectar. She told them how some of the bees had the job of guarding the entrance to the hive and how the waggle dance told bees where the best plants were. She also explained how the honey was made and showed the children some honeycombs which had been made by her own bees. In return for showing them the hives, the children worked like busy bees themselves helping out with jobs around Jennifer’s market garden including cutting, washing and weighing vegetables and planting seeds.

On World Malaria Day 25th April, the children continued their busy bee help, raising money to buy protective mosquito nets. With dusters, polish and brushes the children cleaned the church and in return members of the congregation donated money. The children raised over £27 with their hard work – enough to buy mosquito nets for ten people.

The children used the hexagonal patterned honeycomb as an inspiration for some geometric art patterns and listened to Rimsky- Korsakov’s “Flight of the bumble bee to stimulate ideas for poetry.
They enjoyed a honey tasting session, trying out honey made from orange blossom, clover and heather to see if there were any differences in appearance, smell and taste. Everyone thought all the honeys were delicious but the overall favourite was the thicker clover honey.

Hazel organised a cooking morning, where the children made their own snack of honey flapjacks, measuring out the ingredients carefully and mixing thoroughly. Later in the day the children made their own lunch dessert of honey yoghurt with fresh fruits. Both snacks and pudding were devoured with great enthusiasm. They then gave some of the flapjack to members of the community later in the afternoon including Bill Willis who showed them the beehives he is building at the moment. Over the week, the children learned a lot about bees, had a huge amount of fun and even raised some money for other people. Thank you very much to Generation Science, Jennifer Baker and Hazel for helping out and to The Robertson Trust who sponsored the Generation Science workshop. 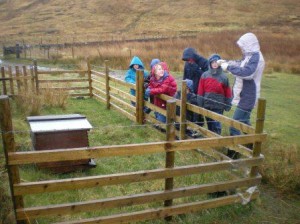 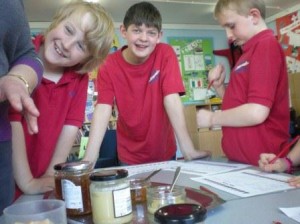 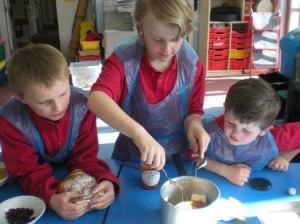 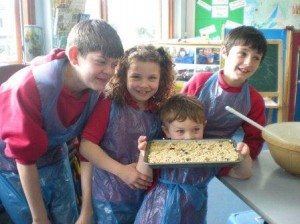