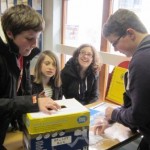 S1 pupils recently held their own mock elections in school as part of their learning in the “Living in a Democracy” unit in Social Subjects. Pupils were divided up into 6 groups, each representing a political party and had to elect their own candidate. The groups organised their own campaign, canvassed support around the school and made their own campaign posters. A husting was held, where each candidate was able to deliver their parties manifesto of policies and promises. This was followed by questions from those in attendance.
Voting took place in the school library over the course of a full day; pupils from P5- S6 and all staff were eligible to vote. The votes were counted and verified by the Presiding Officer, Mr. Lowe. Oscar Grieve’s labour party gained the largest majority and were declared the winners. Higher Modern Studies pupil and Senior Leader, Kier Lewis, said he was “very impressed with all the candidates and their ability to answer questions on the spot”.