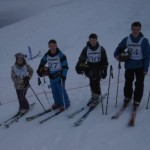 On Thursday 7th February, a team of four skiers, Isla Fowler, Lawrence Lister, Connor McIntyre and Patrick Feeney from the high school, entered a ski competition at Nevis Range ski centre. After a very early start, 6:15am, we arrived in good time to have a warm up and study the slalom course. Weather conditions were good with little wind and the early morning mist lifting to give good visibility for most of the runs.

The team were second overall in their category after some excellent times set by each competitor. Unfortunately only the winners go through to the final at Cairngorm in March. At least we don’t have the problem of an even longer trip to Aviemore! There was some “fierce competition” and “we could have won – if only!”

The event was very well organised by Snowsport Scotland but would have been “cool if stickers were handed out”.
Everyone thought the snow and the ski area were great and would love to do it all again. 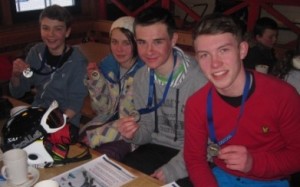