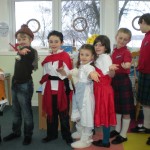 For the week of 4th – 8th February, the children of Lismore Primary School held a EuropeWeek where they learned about all things European.
The children honed their research skills using both computers and books to find out a myriad of facts about their home continent – from the European Union to the different countries; from the highest mountain to the deepest lake and from the variety of languages to the national anthems!

Each day’s snacks were from a different European country for which the children had to say please and thank you in the appropriate language. They tasted pain chocolat from France, Polish biscuits, Swiss chocolate, Grissini from Italy and cheese from Holland; the pain chocolat being the definite favourite!
Each child chose a country to take a closer look at, finding out about traditions and customs, the flag, population, currency and government.

The culmination of Europe Week was a dress up day, when the children came to school in a costume from another country. A Swiss shepherdess, a Spanish matador, a Dutch footballer, an Irish dancer and a moustached French garlic seller all turned up for school as well as a couple of kilted Scotsmen.

On Friday afternoon, as a special treat and courtesy of Lismore Lumiere, the film of the Hunchback of Notre Dame – a story by European author, Victor Hugo. With popcorn snacks, surround sound and the big screen in the hall, this was a real cinema experience. The characters really came to life and everyone was on the edge of their seat until Esmeralda, Phoebus and Quasimodo were safe at the end.