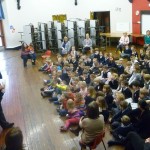 Peverley McChlery, Girlguiding Cowal District Commissioner attended morning assembly on 9th January 2013. She told the children a brief history of the Scout and Guide Movement. The fact they were both over 100 years old, and that Lord Robert Baden-Powell an army officer had originally decided in 1907 that boys and young men may enjoy an organisation where they could do many outdoor activities, like camping, tracking and learning how to live off the land. These were children that never got the chance to do this sort of thing. It was such a success that soon the girls and young women wanted to join the Scouts, as it was a male only organisation at that time they couldn’t so he decided that in 1910 he would start the Guide Association for girls and young women only, they would do the same type of activities the boys were doing.

In 1914 The Brownies were formed for the younger girls.

She then told a short story about a house that was always untidy, children leaving their clothes, and toys lying around – they never helped that mummy to clear the table and wash the dishes. Their mum was very tired of having to do all the work and said to the children “I wish I could have a Brownie come into the house and make it clean an tidy whilst they were in bed. The children thought that this was a good idea, but where would they find a Brownie. They sneaked out of the house when it was dark and went into the wood where they found the Wise Old Owl. They asked him if he knew where they could find a Brownie to help their mummy. He told them to go down to the pond and look in the water and there they would see a Brownie. The children ran to the pond, but when they looked into it all they could see was themselves. They were so disappointed, they went back to see the Wise Owl and he asked what they had seen – they were crying and upset as they hadn’t found the Brownie. He laughed and said they were silly, and that they were the Brownies. The children went home, and before their Mummy got up, they had done all the work tidying the house. Their mother was so surprised, and was so pleased that she had Brownies to help her to do jobs around their house.

Pev also mentioned that three school pupils, Jessica Campbell, Erin McGivern and Emily Wishart were three young ladies the school should be very proud of. In September they had been asked to speak to the Annual meeting of Guide Leaders from all over Argyll about what they had done over the last year. Jessica had talked about learning about first aid to get her First Aid Badge, Erin talked about what she did to get the Environment Badge, and Emily spoke all about Disability Awareness and what she had done to get that badge. All the leaders were very pleased with what the three young ladies had to tell then and in fact Jessica was offered a First Aid Trainers job as she was so good.

Emily and past pupil Chloe Honeyball had also volunteered at the last minute to read a lesson at the Remembrance Day Service we all attended in November.

Pev said that she was very proud of how well the Brownies had done at these two events, and that all their fellow pupils should also be very proud of them, as they were marvellous ambassadors for Dunoon primary School. 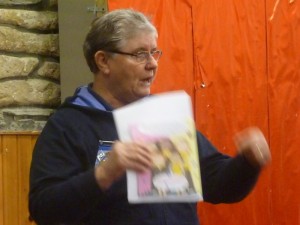 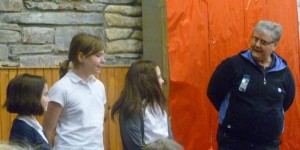