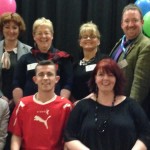 A team from Argyll and Bute Council were invited to deliver workshops at the London Early Years Foundation (LEYF) staff conference on the 2 November in Pimlico, London.

Anne Paterson – Quality Improvement Manager, Stephen Glen-Lee – Head Teacher at Easdale and Luing Primary School and Kathleen Johnston – Head Teacher at Keills and Small Isles Primary School were part of a group of eight who travelled to the conference from Scotland. Other members of the group included Anne Marie Burns from Glasgow Libraries, Alice Sharp – Managing Director of Experiential Play and two members of her team, along with Paul Brannigan, lead actor from the hit Scottish Film ‘Angels’ Share’.

LEYF was established in 1903 and claim to be the UK’s leading childcare charity and social enterprise. Their ambition is to build a better future for London’s children, families and local communities through a commitment to excellence in Early Years education, training and research. The organisation felt that by looking to Scotland, and Argyll in particular, they would see examples of good practice.

As part of their visit, the team were shown around the head office of LEYF, complete with its flagship nursery on Marsham Street in Westminster.  The team went on to visit three other nurseries within Westminster the following day, culminating in a visit to The House of Commons Nursery – complete with its spectacular views of Big Ben through its bomb proof windows.

‘The theme of the conference was “a journey”. The Argyll team shared their “journey” to involving and engaging the children, parents and the wider community in the learning process. The location was as far removed from our Argyll setting as possible within Britain, but one vital element remained the same – the children!

‘Each nursery was quite different in its layout and environment, but the LEYF philosophy shone through – aspiring towards “a better future for London’s children”.  The learning process was more structured and assessment focused than our own ‘Curriculum for Excellence’.  Although each Nursery made the best it could of the outside environment, it did reinforce how lucky we are within our rural settings to have such fantastic outside learning spaces.‘

The conference was attended by nursery staff from all of the LEYF establishments. The Argyll team was asked to present workshops on their early level work in Argyll and to share their experiences. They shared comparisons of community involvement in children’s lives, and looked at the concept that ‘it takes an island/village to raise a child’ and their own communities around their establishments.

On the feedback from other delegates, Anne said

‘We shared laughter, stories, and experiences and built bridges between our very different lives. Our contributions were very well received with comments such as “inspiring” and “why has Scotland got it so right” being made to the Argyll group. The London Early Years Foundation team are providing quality learning experiences for the children of London, and we felt that we also have much to be proud of in Argyll and Bute.’

The challenges of delivering the Scottish Curriculum for Excellence were discussed, but staff felt that it was clear that it is the envy of many of their colleagues south of the border.

As the conference closed, delegates considered the main themes of quality and the home learning environment and staff from Argyll were able to relate them to their own Scottish curriculum. Each of the group felt that the conference and workshops had been an extremely valuable experience with an exchange of ideas and practice and an opportunity to reflect on local provision. 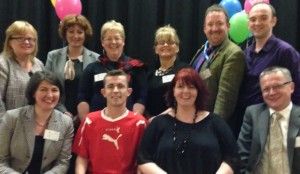