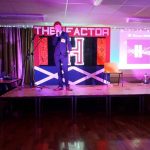 Thursday 29th November was the annual show at Dunoon School Hostel. The young people had been busy for quite a while rehearsing for this event.
The evening kicked off with Findlay, the evenings junior presenter introducing our hosts for the evening, Kara & Tristan. They danced a fantastic routine to ‘Twist & Shout’ sung by the very talented Findlay. The Judges came on , this year we had, Rod Stewart, Simon Cowell, Nicole Scherzinger & Robbie Williams. So good of them to give of their time.

The first act was our new Officer In Charge, Mr David Lyon who played the mini bagpipes. This was followed by Toby who sang and played on the acoustic guitar skilfully and with such emotion, an Oasis hit followed by Love’s Run Out by Circa Waves. Diana Ross & The Chicken Supremes gave an entertaining comedic act, well-choreographed and brilliantly entertaining. Findlay came back on to tell us the story of St Andrews Night.
After the break the talent of Rowan & Rory on the pipes was well received by the crowd. They displayed terrific synchronization: they are piping geniuses in the making. Kane brought the audience to tears as he performed an outstanding Christina Perry song followed by Halleluiah.
We were delighted to welcome back ‘Blue’; Patrick Mulholland, Brandon Wilson and Rory Macrae who reprised their act from 2013. They entertained the crowd with their hit ‘One Love’ to a very appreciative audience. Mr McNeilage performed two songs while the judges decided on the winner.
Special mention to our presenters who did a fantastic job. They were complete professionals. To round the evening off Kane was announced the worthy winner of the ‘H’ Factor after a unanimous decision from the judges. Well done to Director Robert and Assistant Kane who contributed lots of help to the producer Mary, which was so appreciated to complete a spectacular evening. 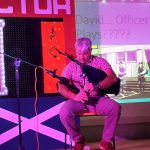 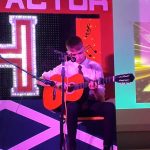 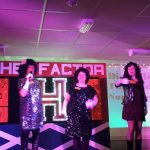 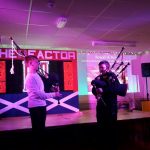 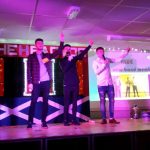 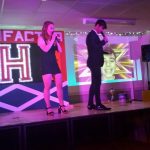 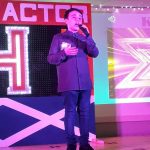 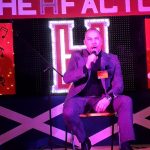