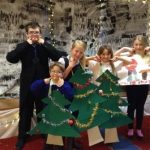 On the evening of Tuesday the 19th of December, the pupils of Clachan Primary performed their musical Christmas show; ‘The Stars Are Coming Out At Christmas’

The school was packed with friends and family who had gathered for a night of entertainment, followed by tea, mince pies and Christmas cake.

The performance was a Christmas awards show, hosted by Noel Knowles and Carol Singer. Christmas traditions put forward their case for winning the coveted award for Outstanding Contribution to Christmas. Some highlights were- the dancing Christmas trees, singing Christmas cards and the boogie-woogie Santa.

After lots of singing, dancing and cracker pulling, the final award went to Beth; The star of Bethlehem