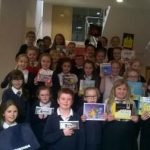 Well done to the P5 class of Dunoon Primary School for winning the P5-7 category of the national French drama competition (Concours pour la francophonie). To celebrate their success, the P5 class were invited to a special event for all the national winners for ‘Le jour de la Francophonie’ (International Francophonie Day) on the 17th March at the University of Edinburgh.Their winning performance was based on an interdisciplinary learning project about the Titanic.

The piece was highly praised for its creativity and making French an integral part of the curriculum. A video of the performance can be viewed click HERE

On the day, the French Institute organised workshops for all the winners. These involved fun activities where the children found out about many francophone countries around the world. These workshops were conducted entirely in French and it was wonderful to see the children learning through total immersion in a different language. This experience really helped to build the children’s confidence and gave them a wonderful opportunity to hear and use the language outside of the classroom.

The workshops were then followed by an awards ceremony where the class received their award and prizes from Emmanuel Cocher, Consul general of France in Edinburgh and Glasgow. They were delighted to receive a collection of beautiful French books for the classroom. These will help to further motivate the children in their French learning. The day was rounded off by a delicious lunch offered by the French Institute and their partners. A great day was had by all!