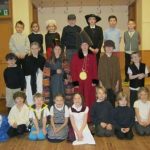 The audience were wowed when the children of Lochgoilhead Primary School performed the play ‘The Pied Piper’ on 21st December, 2016. After the show there were mince pies and tea/coffee or juice. We also sold some Christmas crafts we had made. A total of £183 was raised for school funds. Both children and adults put in an enormous amount of work into it. The Pied Piper was a big success.
By Anna McCulloch, P6.