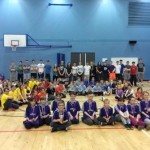 On Friday 11th March the local Primary Schools took part in the first Cowal Sportshall Athletics Festival. This was held in the Games Hall at Dunoon Grammar School and was organised by Andy Trull and Active Schools. Each school team was made up of both boys and girls from P5 and P6. All the pupils took part in seven different events based around the themes of running, jumping and throwing. All the teams participated with great enthusiasm and there was an excited buzz throughout the whole morning. 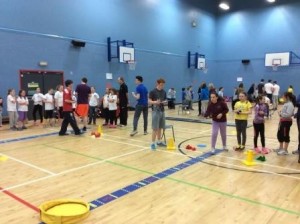 The Sports Leaders from Dunoon Grammar School did an excellent job in running each of the events and were very supportive of the primary pupils. There were many excellent individual performances which showed the depth of talent in our schools. At the end of all the events the points earned by each team were added up for the team prize.
The final results were in fact very close however St Mun’s came first followed by Kirn in second place and a joint team of Lochgoilhead and Tighnabruaich primary schools in third place.


The festival was a great success and we now hope to run it every year. Well done to all the athletes who took part.