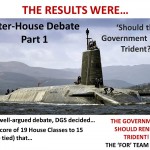 On Friday the 18th December, the pupils of Dunoon Grammar School took part in a whole school debate on ‘should the UK government renew Trident?’ This was the culmination of three weeks of preparation, research and speech writing for everyone involved.

The debate took place simultaneously across thirty-seven of the school’s House Classes. Teachers took a back seat as senior pupils had taken on a leadership role, being given the responsibility to lead the debates as chair, scorer and lead speakers.

Senior pupils felt it was a valuable learning experience, as S5 pupil David McKinnon reflected. ‘I really enjoyed the experience,’ he said. ‘It was great to take control and have that responsibility. I used some of my own free time to do some extra research and wrote up a detailed speech to try and help my team win. I really enjoyed the debate itself in class too – our class got a really good discussion on the go and a lot of pupils were really keen to have their say.’

The UK Parliament will debate on the proposed renewal of Trident in spring of this year. The result of the school’s debate was a result in favour of the renewal of Trident, with a result of 19 House Classes supporting renewal to 15 against (3 were tied). Head Teacher, David Mitchell, said ‘The school debate was a valuable learning experience for all of our pupils, building on school ethos whilst learning about a relevant current issue with both local and national importance. This is a great example of pupils engaging with the literacy Experiences and Outcomes set out by the Scottish Government, and I’m really pleased with how well they have engaged.’
The school debate resources produced by the staff in DGS are now being offered out to the Head Teachers of secondary schools across Argyll & Bute. The results of the debate are being forwarded on to local MP, Brendan O’Hara, who will take part in the House of Commons debate on Trident in a few months’ time.

1 thought on “DGS Debates on Trident”