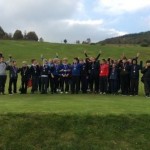 Each team took part in three challenges on the course, putting, chipping and driving, each of which were made all the more difficult by a strong north-easterly wind! The team from Tighnabruaich claimed first place and were proud recipients of a trophy and gold medals, closely followed by Strone ‘A’ in second place and Sandbank in third. All competitors showed great teamwork throughout, and everyone enjoyed the warm hospitality of the golf club for the presentation afterwards.