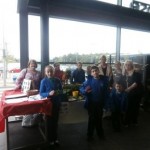 The children at Luss went along to Waitrose on Wednesday this week to sell the produce they have grown through the summer for the ”Grow to Sell” Project in conjunction with Waitrose. This was a feature of their work last year which resulted in a 6th Green Flag and a 4th Total Green Award.

Waitrose donated three bags of seeds for the children to plant; they visited the school and helped to build two new raised beds for growing vegetables. The children worked in the garden once a week growing their produce. They made their own compost which they used to help them grow lettuce, onions, cauliflower, garlic, carrots and many herbs. The children also grew raspberries, rhubarb and blackcurrants and made jam using these fruits. This is the first time they have taken their produce to sell at the Waitrose Store.

The children did very well and made £51 which they will use to buy new tools for their garden.