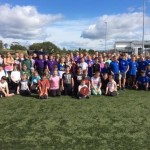 The 2015 Rugby Festival for the Cowal primary schools was held on Thursday 3rd September at Dunoon Grammar School in glorious sunshine. The festival was extremely well attended with over 100 pupils taking part. All the schools had received a block of rugby coaching in the previous year through the partnership between Active Schools, the Rugby Development Officer Brendan McGroarty and Cowal Rugby Club. On the day a number of S6 students did an excellent job by helping to referee the games and coach the young players.

The games were extremely competitive with many of the results being very close. At the end of the festival a number of teams were equal on points however when the number of tries scored by each of these teams were added up, Strone Primary School came out as the winners. St Mun’s Primary School were in second place closely followed by Sandbank Primary School in third place. The festival was a great success and hopefully some of the players will look at taking up the offer of training with Cowal Rugby Club. Many thanks go out to all those people who helped to make the day such an enjoyable one for the young people.