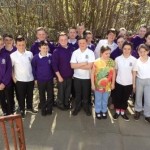 Pupils of Primary 7 at St. Mun’s returned to school after the Easter break to some very exciting news.

Having completed and sent off their designs for the Scottish Engineering Leaders Award for STEM 2014/15 where they had been challenged to interpret the question “If you were an engineer in Scotland – what would you do?” the children were delighted to hear back from the organisers of the competition.

The correspondence received thanked the children for taking part in the competition and went on to congratulate all of the very talented P7 students who had worked hard researching engineering, interviewing engineers and then devising and describing their wonderful inventions.

Although the organisers admitted they found it difficult to make the decision of which concepts should receive what grade, they were extremely impressed by the high level of entries from the school – “the innovation of thought, the quality of illustration and the fantastic breadth of knowledge shown in the entries was exemplary.”

While the organisers attempt to be totally impartial and neutral in their dealings with the entries, they felt they could not let the opportunity pass to mention their delight at the brilliance of all of the designs and awarded a Merit grade to Eimear Baxter, Sam Bulloch, Tom Edgar, Murrin Emmerson, Joshua Geddes, Gregor Jones, Shaun McKenzie, Stefania McLellan, Katie McNeill, Dominic Rafferty, Iona Sargeant, Kyle Sinclair and Connor Wilson.

In addition, after much deep thought and deliberation, the concepts of Emma Cooper and Paul McLeod were awarded a Distinction grade and both of their entries will be sent to a panel of experts at the University of Strathclyde for judging.All of the pupils will receive certificates, of Merit and Distinction and as part of the certification process and, because of their letters of application, all of the children can rightfully say they are now Leaders for STEM.

Emma and Paul’s entries will now be passed to engineering luminaries and professionals who are tasked to look at shortlisted entries from all participant Scottish schools and to adjudicate which ideas will receive trophies at the grand celebration at The Barony Hall in Glasgow early in the evening of Friday 5 June.

Following the prize-giving evening at The Barony Hall, there will be a public exhibition of, at least, two of the shortlisted concepts from each participant school, at the same venue, on Saturday 6 June and Sunday 7 June, which is open to the public.The children will be working with their teacher, Mrs. Blincow, to organise a series of ‘Science Pop-Ups’ and a Science Day, ahead of the school receiving a monetary award from the Primary Science Teaching Trust (PSTT), who awarded their teacher a Fellowship earlier this year.

2 thoughts on “Leading The Way In STEM Subjects”