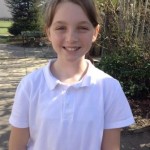 Sci-Ku Success For Murrin
The Edinburgh International Science Festival is an educational charity, which aims to encourage people to discover the wonder of the world around them. The Reading Experiment, run in conjunction with the annual festival, aims to unite the worlds of science and words by encouraging children to delve into science writing.

This year’s challenge was to write a Sci-Ku (Haiku) on the theme of light, following the recognised pattern of 3 lines of poetry with a syllable pattern that goes five-seven-five, making it short and snappy and leaving the reader with something to think about.

Having written Haikus earlier in the academic year, as part of their project on ‘Conflicts’, the children of Primary 7 at St. Mun’s rose eagerly to the challenge, submitting poems online covering a variety of aspects of ‘light’, from Thomas Edison, to the solar eclipse, rainbows and refraction.

The competition encouraged children to research and select their own ideas, organising them for a purpose; build their confidence and communication skills when engaging with others; create a new piece of writing and explore and practice a new genre.

Having received over 1000 science haikus from all over Scotland and beyond, Murrin Emmerson was awarded the runner up prize in the Primary Category of the competition for her poem:

The judges Georgi Gill from the Scottish Poetry Library and author Gill Arbuthnott had a very difficult task in deciding the finalists and prize winners and gave Murrin the following feedback on her Sci-Ku:

“You taught me something new about Thomas Edison!”

Murrin is now eagerly awaiting her ‘prize bundle’ to arrive at school.