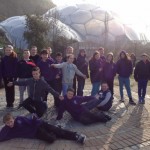 After scooping the coveted Eden Award, at the Rolls Royce Science Awards, held at the Science Centre in London, last November, with their Biodiversity project entitled ‘If You Go Down In The Woods Today’, the children of Primary 7, along with their teacher, set about planning the 1,100 mile round trip visit to The Eden Project, St. Austell in Cornwall.

As well as the beautiful trophy, the school received a cheque for £5,000 to be put towards the cost of the trip to The Eden Project and with the train tickets bought, accommodation booked and the workshops organised, the 19 pupils, their teacher and helpers arrived at Argyll Ferries at 07.30am on Tuesday 17th March, for the 12 hour journey to Cornwall.

With over 1 million plants, and iconic architecture and art, plus a purpose-built education centre, the Eden Project is the ideal destination for school trips and having travelled such a long way the children planned to get the most out of their prize. 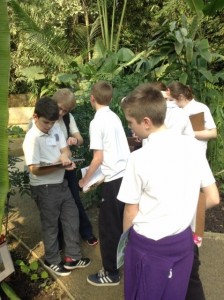 Day one of the visit was paid for as part of the Eden Award and the morning saw the children join Charles Darwin on his voyage to South America. On the way they had to hone their scientific skills and knowledge of classification, adaption and interdependence, completing an activity to review the classification of living things (rainforest organisms) and the use of identification keys. They then ventured deep into the Rainforest Biome to locate, identify and classify unusual plants and also consider their associated animal communities.


They were then challenged to identify and explain various adaptions of living things to life in the rainforest as well as use body sculpture to represent them. Back in the ‘Core’ a state of the art classroom, the children discussed their findings and recognised that living things have changed over time and that fossils provide information about living things that inhabited the Earth millions of years ago. They also identified how animals and plants are adapted to suit their environment in different ways and that adaptation may lead to evolution.

After a picnic lunch, the children went on a journey around the Mediterranean biome to collect a plant-based data set. From the class data set they then had to identify commonly occurring numbers which lead them to the Fibonacci sequence. Using further examples from the natural world and a geometric drawing activity they began to realise that mathematical patterns are at work all around us, from the spiral shapes of the Milky Way to the packing of seeds in a sunflower head.

Finally, the children were challenged to investigate Eden’s iconic Seed sculpture and take a closer look at the Core building to see how people, art and architecture have also been influenced by this intriguing sequence of numbers.

In the evening, after a hearty dinner, the children explored the sights and sounds of the Rainforest Biome, by moonlight. The visit saw them see the environment in an entirely different way and appreciate that different animals and plants come out by day and night. The session ended with tales of Rainforest tribes and the children composing and performing their own Rainforest music. 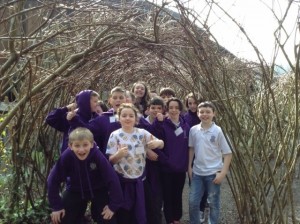 Day two of the visit was organised by the children’s teacher, Mrs. Blincow and the Education team at the ‘Core’ who provide workshops which are specially designed to help meet curriculum targets across a range of subjects, from geography, art and science (biodiversity, biology, botany, conservation, ecology, and horticulture) to architecture and sustainability. The morning session saw the children back in the Rainforest Biome looking at suitable materials to build shelters.


Then it was back to class and into teams to do a bit of bartering for the materials to build their own shelters, which were then tested for their ability to withstand wind and rain, with some hilarious consequences….. 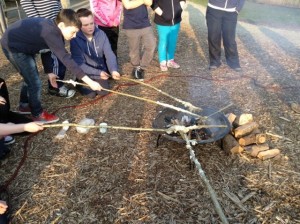 After lunch and the compulsory visit to the shop, the afternoon activity, ‘Fire Carriers’ involved pupils learning how to light a fire safely using flint and steel, as well as matches; make a light source out of cooking oil and reeds and make bread, which was cooked in an open fire. 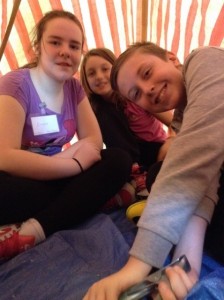 In keeping with the ethos of sustainable living, accommodation on the site, is provided by the YHA and made from reclaimed shipping containers, which have en-suite facilities, TVs and Wifi access. But the highlight of the accommodation had to be the tractor-train ride morning and night to and from the accommodation to the Eden Project biomes!

With the final morning, came clear skies and a bird’s eye view of the Solar Eclipse before heading for the train and the journey home.

The trip was a resounding success, encouraging growth in skills, confidence and self-reliance and broadening the pupils horizons through real experiences in the great outdoors. The children plan to produce a presentation about their experiences, which they will invite their parents and the other children in the school to see. While they will continue, next term, to complete ‘Eden Journals’, with follow up lessons and further research activities.

1 thought on “St. Mun’s Explore The Rainforest…. In Cornwall”