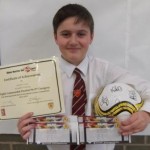 Nicholas, a P6 pupil at St. Joseph’s Primary School in Helensburgh recently attended Hampden Park with his mum and teacher, Miss Trainer for the winner’s day out following the ‘Show Racism Red Card Competition’. Show Racism the Red Card (Scotland) is a charity that promotes anti-racism through education. The aim of their campaign is to combat racism through education and the use of footballers as role models. 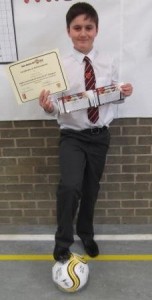 Each year Show Racism the Red Card hosts a creative competition where children are invited to enter their creative ideas on how to promote anti-racism in a visual form. All possible winners were invited along to the celebrations at Hamden Park, this year on 19th March, 2015.Nicholas won a ‘Highly Commended’ award on the day and had a wonderful time with his chosen school friend John.

Everyone at St. Joseph’s was delighted to have a winner among them, with a number of the children having entered the competition. With annual entries almost at the 5000 mark, Nicholas’ ideas were obviously highly impressive. Well done Nicholas!

1 thought on “St. Joseph’s a Winner at Showing Racism the Red Card!”