The Brooch of Lorn is one of the great medieval jewels of Scotland, with a charmstone in its centre which was believed to have magic powers.
As Robert the Bruce fled during battle against the MacDougalls of Dunollie in 1306, he left behind his cloak. Pinned to this was the Brooch. It has been a great prize for the MacDougalls ever since and is still held by the Clan Chief. Originally it would have been a simpler jewel but around the same time as Shakespeare it was transformed into a fabulous silver and pearl brooch.
Rare and beautiful, it was chosen to be part of the 2012 Cultural Olympiad exhibition on Shakespeare’s world at the British Museum in London.

In celebration of the Hope MacDougall Collection’s part in the Olympic year a display has been created telling the story of the brooch. At its centre is an exact silver, crystal and pearl replica of the famous BROOCH OF LORN

Argyll & Bute Library Service would like to invite you to bring your pupils to see the display, which is now on tour. Please contact the library to organize a visit. It can be seen at the following locations for one week: 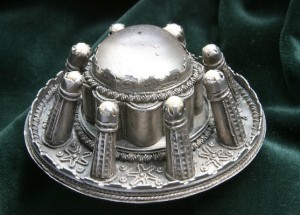