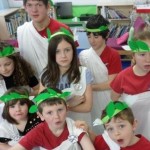 Sumus Romani!
26th – 30th January 2015 was Roman Week at Lismore Primary School. This term’s main focus is Myths and Legends and the children decided to take a closer look at one of the civilisations from which many of the ancient myths come. As part of the topic the children will be performing the Roman legend of Androcles and the Lion at the North Lorn Drama festival and this gave the children another reason to research these fascinating people.

The week was packed with activities looking at every aspect of Roman life including the language, the food, and the army and even bathing habits.

First there was some Latin. The children learnt to say hello and goodbye and also used pictures and stickers to find out words for everyday items. They then compared these words with similar words that are used in today in modern English.

The children were given a postcard written in Latin which had been sent from a Roman boy who was on holiday in the mountains.

Using a vocabulary sheet to help them the children had to work out how he was getting in. They were interested to find out that the words in the sentences are not in the same order as they are in English and that Romans did not use capital letters at the beginning of sentences. 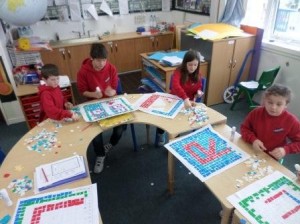 During numeracy sessions the children investigated tessellation learning that the word tesssera is Latin for tile. They went on to make a mosaic of their initial using tiny cut up squares.

They learned how to use Roman numerals and tried some games and quizzes using them. Everyone agreed that our numbers are much easier to use!,

The children looked at some archaeological evidence for the Romans, trying to work out the function of various artefacts. They were very fortunate to receive a visit from a real archaeologist who explained what her job entailed and discussed some of her most exciting finds before answering the children’s many questions. 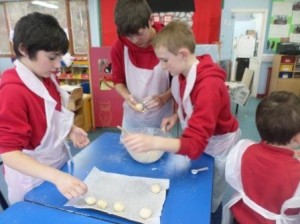 One afternoon the children cooked Roman sweet wine cakes. These contained grape juice, cheese, cumin and aniseed as well as the more normal ingredients of eggs, flour and lard. They were quite easy to make but tasted a little dry on their own.


Throughout the week, the children were set a Roman Research Challenge. They were presented with a number of tasks on subjects ranging from the Roman army and its soldiers, to Roman baths and toilets, as well as Roman place names and roads and Roman gods and goddesses.

Each child chose the tasks they were most interested in and was awarded a Gold, Silver or Bronze medal at the end of the week depending on how many challenges they had completed. The children gathered a vast amount of knowledge through these tasks and were able to discuss different aspects of Roman life intelligently. 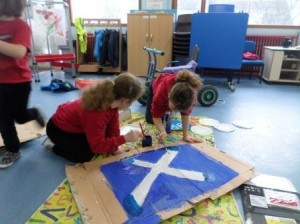 Hazel challenged the children to turn the two double trikes into chariots for a chariot race at the end of the week. They sketched out a few ideas and looked at some pictures on the internet.

They then spent many of their break times decorating their vehicles before the big race. They also tried out some other Roman sports – Roman ball, trigon and harpastum which are all tactical ball games with simple rules.


Towards the end of the week the children looked at the importance of the legacy of the Romans in Britain, finding out about all the things which the Romans did for us – introducing coins, cats and clean water as well as fruit and vegetables, cement and public baths and parks. The children decided that the police and laws were the most important things the Romans gave us, closely followed by coins and clean water. They felt that bringing nettles, cats and fruit and vegetables were less important.

On the final day of the week, the children made togas out of old sheets and fashioned large brooches from card, blu tac and foil which they used to fasten the cloth over their shoulder. Suitably dressed, the children attended a Roman dinner party. They reclined at low tables just as the Romans would have done and tried delicacies such as dates, olives and grape juice. They also found out that Romans enjoyed eating swans and dormice although the dormice the children tried were definitely sweet and probably tastier than the original ones! 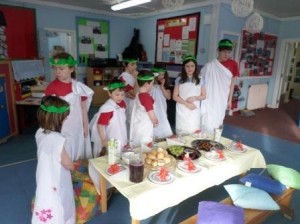 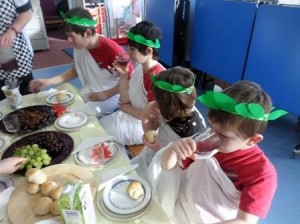 The children finished the week with a quiz for which they made up the questions themselves. Both questions and answers demonstrated how much the children had found out and learnt. Each child was then presented with a certificate as a reward for completing the Roman Challenge.