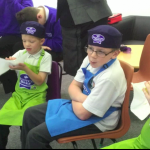 Primary Five pupils at Hermitage Primary School and Parklands’ pupils have been having a great time. They were fortunate enough to secure funding from the Scottish Government’s ‘Food For Thought’ programme.
This enabled them to plan, prepare and deliver a ‘Taste of St Andrew’ dinner for their parents on the evening of Thursday 27th November in the Victoria Hall, Helensburgh
The planning started even before school broke up in summer as they had to plant potatoes which would be ready to harvest later in the year. 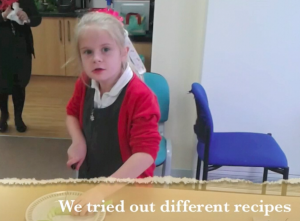 Loch Lomond Homes and Garden Centre supplied their expertise and advised us on which vegetables we could grow and harvest in November. 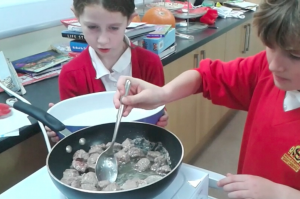 Scottish Beef supported, too, by coming to school and promoting the benefits of good Scotch Beef and also demonstrated how to cook meat.

Cameron House, Loch Lomond helped by sending one of their restaurant managers to show the pupils how to prepare for an event, set tables, fold napkins, serve and pour drinks – good Scottish water only of course!!


Dino’s Café owner advised us on a delicious Scottish flavoured tablet ice cream for a dessert. 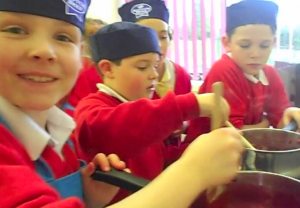 Pupils also took part in cooking sessions in the kitchen at Parklands School, supported by a very talented parent, and prepared fruit coulis and shortbread prior to the event.

The manager of the Riverhill Courtyard restaurant in town provide his expertise and labour on the day and helped the pupils devise recipes which would be suitable for such an event.


Waitrose sent two very enthusiastic members of staff to talk to the pupils about Scottish produce and the issues around food miles.

The pupils themselves created the menu, made the invitations, table decorations and place cards for the event. 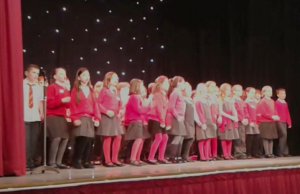 Glen Fruin Fiddlers gave their time by playing a selection of Scottish tunes to welcome the guests as they arrived on the evening.

The pupils also provided a selection of contemporary Scottish songs and a dance routine as entertainment at the dinner.

All in all, a great night was had by all.

The pupils learned many new skills. The learning was a real life event and a multitude of relevant experiences were gained as a result of this project and a big thank you must also go to all the partners who gave their time and expertise to make this event such a success.