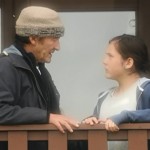 In June 2013, a number of pupils from Dunoon Grammar School joined together to create a short film to raise awareness of the dangers of smoking. The film was called ‘The Last Cigarette’ and was made by passionate drama students along with the help of David Hayman’s film company, Shooters and NHS Highland. The film originally came about because the NHS had asked the Charity Spirit Aid, also operated by David Hayman, to come up with ideas for an anti-smoking video that would be aimed at young people and would encourage them to not only stop smoking but not to start in the first place.

The short film was produced very quickly and was filmed in several locations around Dunoon in just one week, even though the Shooters team were at the School for two weeks. This was because they spent the first week getting to know everybody and practicing some new and useful acting techniques. The filming was done in many places including the beach, local stadium, grave yard and of course – the school itself. There was a lot was pressure on everyone involved to get the whole thing filmed in the time given but after some hard work and commitment, an amazing and unique film was made.

Now, over a year later, it has been revealed that ‘The Last Cigarette’ has been awarded not one but two prizes as part of the British Heart Foundation No Smoking Day 2014 competition. The movie scooped the Best Media Coverage and the Unusual/Innovative Event categories of the prestigious UK wide awards.

Alex Paton who starred in the lead role commented:
“I absolutely loved being part of the project and it really helped build my confidence.”

Georgia Wallace who also played a key role added:
“The process was incredible and I really learnt a lot. I am proud to have been involved.”

Head Teacher, David Mitchell commented:
“It a great honour that the No Smoking Day 2014 awards has chosen the DGS, NHS Highland and Shooters charity initiative as the winner of two awards. It is credit to the pupils involved that their work has gained this national recognition. I would of course like to that NHS Highland and Shooters for the support and guidance given to our young people”. 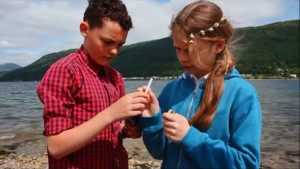