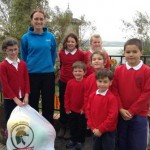 Active Schools Co-Ordinator Lindsay Mitchell presented Strone Primary School pupils with a bag of sports equipment for having the highest percentage of pupils taking part in the Commonwealth Passports scheme last year, which rewarded pupils participating in extra-curricular sports activities both in and out of school.

Strone Primary also had the pupil with the highest number of hours of extra-curricular activity, Abbie Stone, who won an individual prize. This year Strone Primary School are re-registering with the scheme and are keen to improve on last year’s performance and have their sights set on a SportScotland Gold Award.